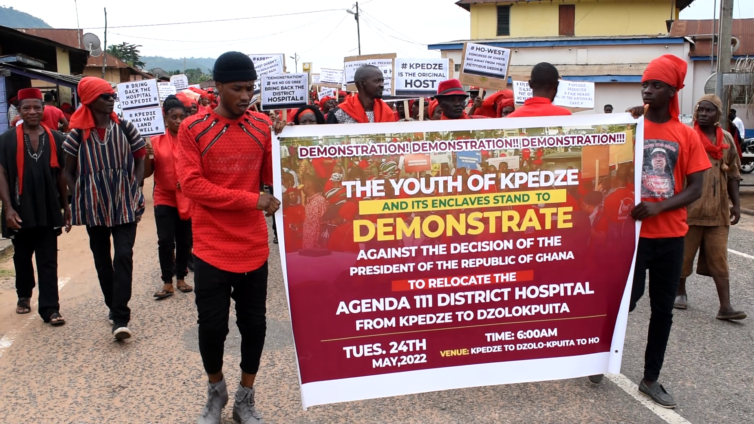 The Chiefs and people of the Kpedze Traditional Area are protesting the siting of an Agenda 111 project in the Ho West District of the Volta Region.

They argue that constructing the district hospital in Dzolokpuita flouts a convention to equitably distribute development projects across the district.

According to traditional authorities, the Ho West Congress of Paramount Chiefs had a convention to guide the equitable distribution of development projects when the district was created in 2012.

The entire community got infuriated when the government allocated the Agenda 111 project, a district hospital facility, to Dzolokpuita, ignoring the convention.

However, the regional Minister, Dr. Archibald Letsa, had explained what informed the decision to construct the hospital in Dzolokpuita to the Ho West Congress of Paramount Chiefs during an earlier visit.

Dr. Letsa detailed that some technocrats identified that a greater portion of the district will be denied access if the facility is situated in Kpedze, the northeastern part of the district.

Fiaga of the Kpedze Traditional Area, Togbe Atsridom V, who was part of the delegation said he was not convinced with the explanation by the Minister.

He lamented that the traditional authorities were not involved in the process, hence, he believes it is some elements in the district who are scheming to site the project in Dzolokpuita disregarding the convention that has guided development in the district.

He narrated how a litigation free parcel of land was made available, surveyed, tested and approved for the hospital project only for the authorities to abandon the land and move the project to Dzolokpuita.

Residents of Kpedze, young and old, thronged the streets to protest the citing of the Agenda 111 project in Dzolokpuita.

They travelled 9.4 kilometres on foot from Kpedze to the Assembly premises in Dzolokpuita to present a petition to the government through the Ho West District Chief Executive, Earnest Apaw.

The protesters wielded placards which read “Kpedze is also part of Ho West”, “Kpedze has vast lands as well”, “No hospital, no NPP in Kpedze”, “No change of plan” and “We are citizens, not observers”.

Others had inscriptions such as “The hospital is not for sale, it’s ours”, “Kpedze is also part of Ghana” and “No hospital, no political activity”.

The Convenor of the Kpedze Youth Association and Assembly Member Kpedze Awlime-Todze, Kasim Osman Adamu expressed the community’s disgust at the sudden change of development plans for the district.

He outlined that almost all decentralized departments are already headquartered in Dzolokpuita.

Mr. Adamu Adamu grieved that the Kpedze Policlinic has become ‘redundant’ since it is unable to meet the demands of the over 6,000 residents who depend on it for healthcare.

He asserted that Kpedze being the most economically viable community and in dire need of modern healthcare should host the district hospital.

“The institution should not have been relocated from Kpedze to Dzolokpuita since Dzolokpuita is already close to Ho and Saviefe Catholic Hospital, where patients may receive good health care”, he opined.

He, therefore, gave the government two weeks’ ultimatum to rescind its decision or face their wrath.

He outlined that the Kpedze Traditional Area would be compelled to disassociate itself from Ho West West District, assembly members from the area would not to participate in assembly sittings, residents would not to pay revenue and the New Patriotic Party would be prevented from organizing political activities in the area if the government fails to address their concerns.

Mr. Apaw assured them that their grievances would be attended to by the authorities who have taken notice of the events and appealed to them to allow government operations to continue in the area.