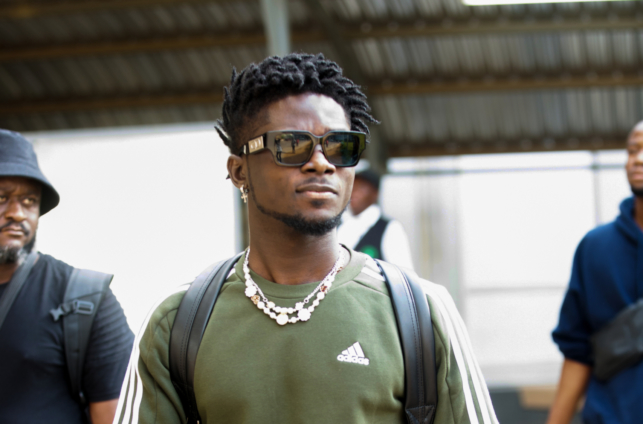 Musician Kuami Eugene has sparked rumours that he may be leaving Lynx Entertainment.

Lynx Entertainment is a music label Kuami Eugene has been signed to since his introduction into the music industry years ago.

Many fans have for years assumed the artiste, who seemingly has a good relationship with the label, may choose to stay there forever.

However, on Monday, the artiste took to Twitter to make some comments that have had them questioning if all is well at the label.

“I try saaa say I go stay but charley I for leff. Suro Nipa [sic],” Kuami Eugene wrote in a now-deleted tweet.

Some fans have since been posting theories about incidents that happened months ago, suggesting that the ‘Ohemaa’ hitmaker’s relationship with his label is broken.

But, other social media users believe the singer is just courting attention for a possible new project.

See some comments below:

A-Plus already said this about kuami Eugene leaving lynx entertainment. This was 3 months ago on United Showbiz pic.twitter.com/PUbnuft4Fp

Kuami Eugene got y’all there. He is not leaving lynx entertainment. He just wanted your attention so that he can release the EP

We call something panin de panin😎

I hope Kuami Eugene succeeds no matter the outcome of this wanting to leave saga pic.twitter.com/5ZMzBXjgBM

Is Kuami Eugene leaving his group or what he tweeted was part of a new lyrics??

Whatever kuami Eugene is going through Charlie stay Strong 💪..

If Kuami Eugene has truly left Lynx then his next Record Label deal must be in the league of Blacko’s Empire else…… this independent act thing is not for the soft-hearted, u should ve the “stubbornness” of Sarkodie to stay relevant and keep it running for a decade!

Kuami Eugene try saa but 3nfa so he for leave but the question is can he do the work alone or he has another lebel where dey go? We didn’t come here to play ampa

@KuamiEugene I think the boy is stressed. right now Ghana make hot so small thing you go do man go bore I hope he open his eyes when he leaves lynx.

Lol I knew something was up , kuami Eugene was just too quiet https://t.co/6fCD82ER1D

eih if you dey come leave Lynx dier, then your spirit for strong oo.
That place once you leave, then it’s like your career is 95% over. Hmm

hehehehe. Bro, ebi serious matter. We have to look inside this thing waa. It can’t be about the guys are not good or even promotion matter sef. Hehehe🤣🤣

Meanwhile, there are rumours that Kuami Eugene is joining EMPIRE – a management and music distribution label.

This is coming months after Kuami Eugene went on a Europe tour with label mate KiDi.

Meanwhile, Lynx Entertainment has signed new artistes and actors to their agency in honour of their anniversary.

They include Adina, Adjetey Anang, Maya Blu among others.

DISCLAIMER: The Views, Comments, Opinions, Contributions and Statements made by Readers and Contributors on this platform do not necessarily represent the views or policy of Multimedia Group Limited.
Tags:
Kuami Eugene
Lynx Entertainment