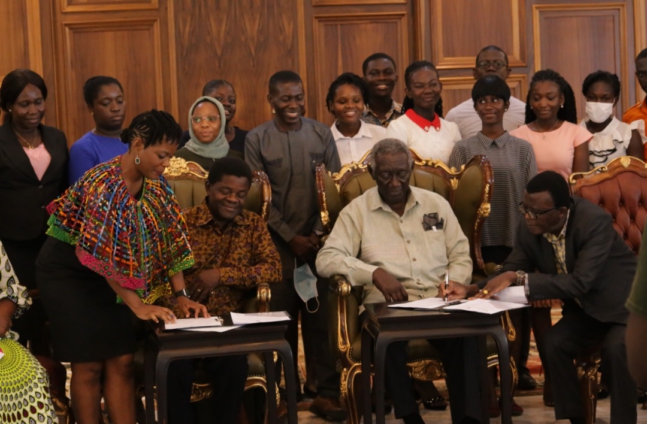 Beneficiaries of the Kufuor Scholars Program will soon begin benefiting from scholarships to pursue postgraduate studies at the MountCrest University College, the John A. Kufuor Foundation and the university college have announced.

The two institutions have signed a memorandum of understanding that will allow for the Kufuor Scholars to benefit from scholarships to pursue law and health programs.

Additional programmes, particularly graduate and professional development programmes, may be included in the scholarship scheme from time to time as and when Mountcrest obtains accreditation to offer them.

The scholarship award will cover costs including, but not limited to, admission; registration; tuition and examination fees.

“What the Foundation is doing in partnership with MountCrest is to ensure that one day you will become the baton. We are passing it on to you. Use yourselves as instruments in the transformation of lives. Aim higher. Aspire higher,” Mr. Ansah-Asare observed.

“You’ve been given a platform. You are to use the platform as a springboard. See yourselves as instruments in the hands of God being used to transform a society,” he told some of the scholars who were at the residence of Former President Kufuor at Aburi to witness the signing ceremony.

“You are the future leaders. Not only future but also the very future of Ghana and beyond. Who knows, maybe one day one of you will become a Kofi Annan. Or His Excellency the president,” the MountCrest University College founder added.

Former President Kufuor told the ceremony; “we want to prepare our scholars for service in order to make our society better and not to just give them additional degrees.”

“With this mentoring, by the time you get your degrees from tertiary institutions such as MountCrest, you know you have to go out there as a missionary to help better the lot of the many of us who have not been so exposed as you,” he added.

“In terms of collaboration, like minds think alike; we thought that the values of the John A. Kufuor Foundation mirrored those of the Mountcrest University College in the sense that our focus is on capacity building for development,” she explained.

“Given the calibre of scholars that we have from this programme and the grounding that they have already had, this will prove to be a success story and we are looking forward to the fruits of this marriage,” the rector added.

She announced there has been the establishment of the John A. Kufuor Academy for Leadership and Governance at the university college. Non-Kufuor scholars who join a 12-week intensive programme at at the academy will also be eligible to benefit from the scholarship program.

The Kufuor Scholars Program is an initiative of the John A. Kufuor Foundation which offers mentoring and coaching opportunities for tertiary students recruited through vigorous competitive processes over a three year period.

The program has the overarching objective of mentoring a critical mass of future change agents; leaders imbued with a strong sense of patriotism; leaders who are innovative, problem solvers, creative thinkers and knowledgeable professionals in their respective fields of endeavor. About 112 students and former students have benefitted from the program since 2015.

“At the head of all our development efforts is leadership. And that is what inspired us to start this Kufuor Scholars Program,” Chief Executive Officer of the John A. Kufuor Foundation Prof. Baffour Agyemang-Duah told the ceremony.

“This is a very exciting expansion of this leadership programme. We are very fortunate to have another dynamic institution to partner with us to achieve the greater goal of not just preparing you for leadership, but also giving you the technical skills and leadership skills that will make you fully functional when you are out of this Program,” he told the scholars.