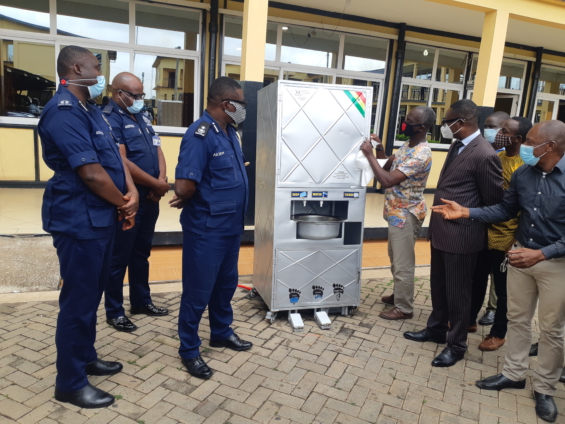 The Kumasi Technical University has donated a foot-operated hand washing machine to the Kumasi Metropolitan Assembly (KMA) and the Kumasi Central Police Headquarters to support the fight against Covid-19.

The machine designed by the University’s Mechanical Engineering department has refillable containers for liquid soap and water.

The containers have nozzles to deliver the fluids while the relevant valves are connected to foot pedals which cause the fluids to flow when it’s stepped on.

Also included is a bin which is also foot operated to allow users to deposit used tissue papers.

Tissue is easily accessible after the user has washed his hands.

The university will be distributing nine of the machines to the Manhyia palace, hospitals among others.

Registrar of the University, Dr. Ebenezer Kofi Boakye says they want to leverage their technical expertise in the fight against the disease.

He called for industrial partnership for nationwide distribution.

“We have the technical expertise and industry players can work with us. They support us with resources and we can come out models and we can distribute throughout the country,” he urged.

Metro Coordinating Director, Kwadwo Akuamoah Boateng who received the machine on behalf of the Mayor of Kumasi urged the university to deepen its relationship with the Assembly to solve problems in the metropolis.

“As a Technical university, there are so many areas we can collaborate to manage the city,” he said.

DISCLAIMER: The Views, Comments, Opinions, Contributions and Statements made by Readers and Contributors on this platform do not necessarily represent the views or policy of Multimedia Group Limited.
Tags:
Covid-19
Kumasi Technical University