Kwasi and Abena on opposite sides of the UK’s economy  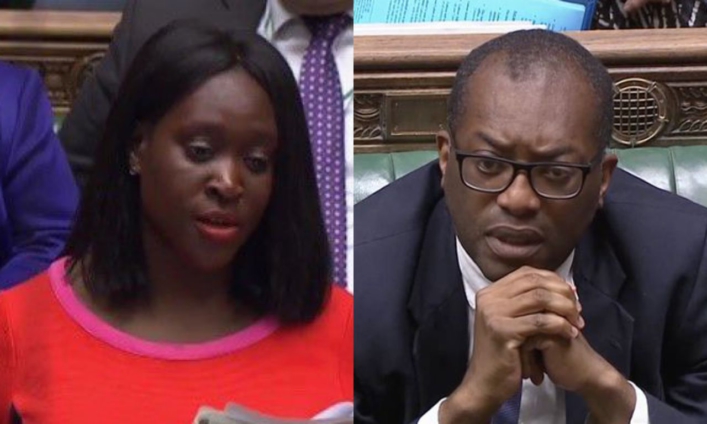 Born in London to Ghanaian parents, Kwasi Kwarteng and Abena Oppong Asare are on the opposite sides of the United Kingdom Exchequer.

When Newly 56th Prime Minister Liz Truss took office after meeting with the late Queen Elizabeth at the Balmoral, she proceeded into number 10 Downing Street to begin the appointment of her cabinet members.

The Chancellor of the Exchequer is the government’s chief financial minister and as such is responsible for raising revenue through taxation or borrowing and for controlling public spending. He has overall responsibility for the work of the Treasury.

Kwasi Kwarteng born in the London Borough of Waltham Forest in 1975 is the only child of Alfred Kwarteng and Charlotte Boaitey-Kwarteng, who had emigrated from Ghana as students in the 1960s. His mother is a barrister and his father is an economist in the Commonwealth Secretariat.

He was previously Minister of State at the Department of Business, Energy and Industrial Strategy and also worked as Parliamentary under Secretary of State in the Department for Exiting the European Union from 16 November 2018 to 24 July 2019.

Kwasi read classics and history at Trinity College, Cambridge, and then attended Harvard University on a Kennedy Scholarship. He earned a PhD in economic history from the University of Cambridge in 2000.

Before becoming a Member of Parliament, Kwasi worked as an analyst in financial services.

What do we know about the “Black Boris,” as he was enthusiastically dubbed by his own campaign team in his Spelthorne constituency? And is he up to the job of tackling the worst economic crisis since the late 1970s?

The role could hardly be more demanding, given the fact that the current cost-of-living crisis is nothing compared with what is likely to come this winter, and that the war in Ukraine is settling into a prolonged stalemate.

On the opposite of Kwasi Kwarteng expected to provide oversight over the exchequer is another British-born to Ghanaian parentage, Abena Oppong Asare who is the Labour Member of Parliament for Erith and Thamesmead serves as the shadow Exchequer secretary to the treasury.

Born in 1983, Oppong-Asare was educated at Kent University and worked as a parliamentary researcher before becoming an MP.’ When the opportunity came, a lot of people encouraged me to go for it, but there were those who said I couldn’t do it and if she had listened to such voices I wouldn’t be here today and this is why she has been urging her colleague female MPs “not listen to the small voices because the higher you rise the tougher it gets.” She told JoyNews.

As the first Black woman to hold the chair of labour Women’s network, she is been involved in the training and mentoring of young females aspiring to go into public service.

“Within the short period that I have been in parliament, I have been promoted several times and currently occupy the role as Shadow Exchequer Secretary to the Treasury and also sit at the front bench and this has not come easy but also bears testimony to the fact that when given the opportunity women can do it despite the obstacles and we must work towards changing the narrative on sexism and other barriers that work against women in politics” she added.

The constituency of Erith and Thamesmead found in South East London which voted for leave during the Brexit referendum, is ethnically diverse, with a third of the local electorates being black or mixed race.

DISCLAIMER: The Views, Comments, Opinions, Contributions and Statements made by Readers and Contributors on this platform do not necessarily represent the views or policy of Multimedia Group Limited.
Tags:
Abena Oppong Asare
Kwasi Kwarteng