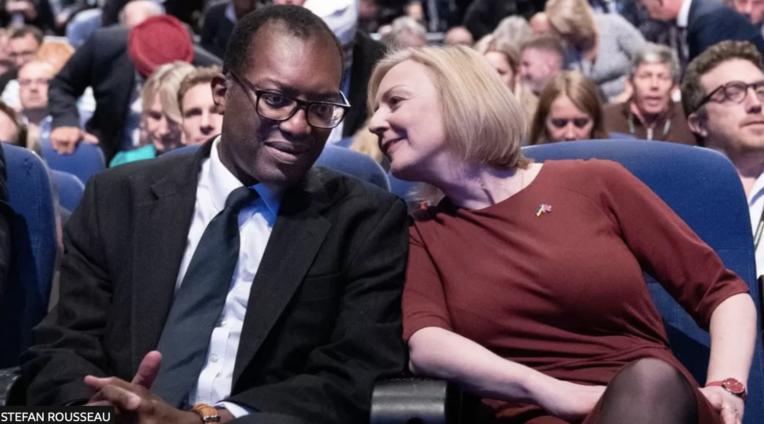 A fortnight ago at the top of the Empire State Building in New York, the prime minister told me she was willing to do things that were unpopular.

That is a theory she very efficiently tested to destruction.

Her party’s poll ratings plunged as deep as that Manhattan skyscraper is tall following her government’s announcement of a tax-cutting package.

This policy was destined to crowd out everything else here at Tory conference in Birmingham for a simple reason.

Tory MPs from ministers down said it was unsellable: offering the best paid a tax cut with the prospect of public spending and benefits cuts at the same time.

That is why a policy that just 10 days ago was presented as a triumph for the new Chancellor, a moment of political theatrics, a moment leant into and revelled in, has now sunk to the bottom of the canal here in Birmingham; junked, binned, gone.

This leaves the new Chancellor Kwasi Kwarteng – and by extension the prime minister – downcast and humiliated, wounded and weakened.

“Can I have a black coffee?” he asked, on arrival for an appointment with Nick Robinson at 0810 on the BBC’s Today programme.

If ever there was a moment for this chancellor to request that beverage, this was that moment.

Twenty minutes later, as he climbed out of his chair, the look of relief on his face was obvious.

He had, by the end of the interview at least, acknowledged “we got this wrong”.

He had also said – about the broader package of measures in his statement – “we reset the debate”.

They had, but not in quite the way they had anticipated.

That debate, within the Conservative Party and beyond, was whether the new government knew what it was doing.

Whether the new government was in control of events.

On that last point, they weren’t.

Liz Truss will now hope this U-turn creates space to move forward, hauling herself out of the political quagmire of a budgetary statement that imploded on contact with political reality.

This is another defining moment for a young government not yet a month old.

And one that won’t be forgotten.