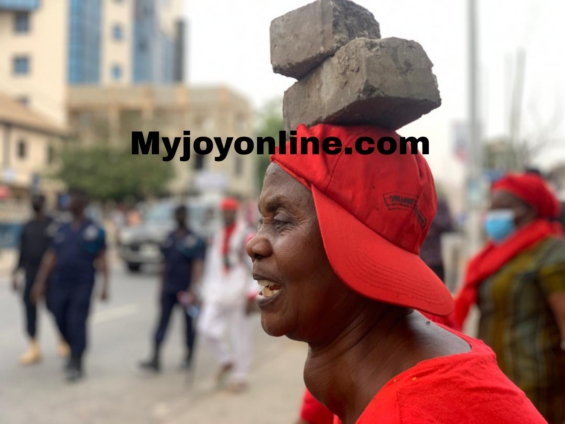 The Youth Wing of the National Democratic Congress (NDC) on Thursday morning hit the streets of Accra to protest the passage of the Electronic Transactions Levy (E-levy).

The group was joined by aged citizens, head porters also known as “Kayayie”, Coalition of Concerned University Students (CoCUS) among others.

But a lady, about 50-years old, stood out of the crowd. She carried blocks on her head while protesting.

She called on former President John Mahama to come and offload the burden she had on her head due to the governance of the Akufo-Addo-led government. She raised the issue of youth unemployment in the country.

“Mahama should come and offload my burden. We are suffering. Our children are not going to school. They have taken the money but there are no jobs. Mahama, come and take your stones,” she said.

The statement “come and take your stones” is a Ghanaian proverbial phrase.

It is used when an individual predicts or prophesies an event or occurrence and the said prophecy get’s fulfilled. Most often, the prediction warns of a disaster or a tragedy, which many fail to heed.

President Mahama last year urged Ghanaians to brace themselves for more challenging times ahead under the Akufo-Addo-led government.

“We may yet have to endure these very difficult times for a while more due to a combination of factors,” he said on Wednesday, November 10, in Accra to climax his 2-day ‘Thank You’ tour of the Greater Accra Region.

For this reason, the former President has been asked to come and take his stone.

DISCLAIMER: The Views, Comments, Opinions, Contributions and Statements made by Readers and Contributors on this platform do not necessarily represent the views or policy of Multimedia Group Limited.
Tags:
E-Levy
NDC Youth Wing
Protest