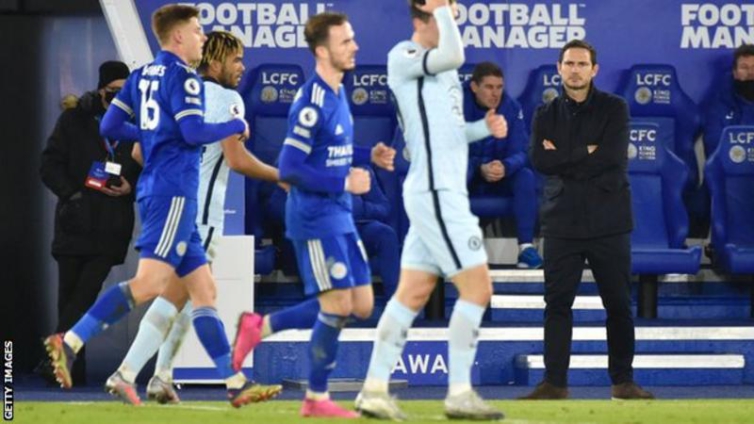 Since beating Leeds to go top of the table in December, Chelsea have taken just seven points from their past 24 available in the Premier League

Frank Lampard said he is worried about Chelsea’s form after they were soundly beaten at Leicester, a fifth defeat in their past eight Premier League games.

Goals from Wilfred Ndidi and James Maddison secured a 2-0 win for the Foxes that sent them top of the table at the midway point in their season.

By contrast, Chelsea, who had started December top of the table, are now eighth.

“It’s not where we want to be,” said Blues boss Lampard.

“I am worried. From the form we were in to get so quickly in to the form we’re in now, even with the Fulham win [on Saturday] and some other wins in there, we should be better than losing five in eight.

“It’s a young team. They won’t be feeling nice. I’m not against the lads in the dressing room. They will have learned a lesson.”

Chelsea rarely troubled a Leicester side brimming with confidence as they won for the third game in a row.

The hosts could have won by a bigger margin if they had taken one of a number of chances they created while Chelsea’s big-money signings failed to make an impression.

Lampard felt too many of his players failed to do the basics correctly.

“We were asleep in moments. I felt like there were quite a lot of moments in the first half where our sharpness wasn’t there.

“The basics and bare minimums are to run, sprint and cover ground, and too many of our players didn’t do it.”

DISCLAIMER: The Views, Comments, Opinions, Contributions and Statements made by Readers and Contributors on this platform do not necessarily represent the views or policy of Multimedia Group Limited.
Tags:
Chelsea
Frank Lampard
Leicester City
Premier League