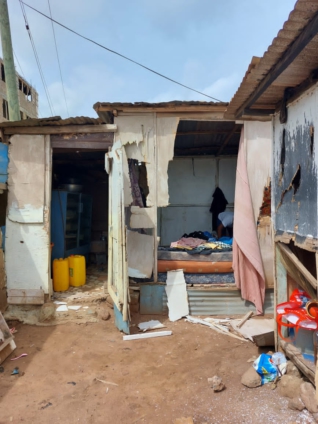 An attack by land guards on properties on a land at Sawmill Down at Dome Pillar Two in Accra on Sunday morning has left more than 60 residents, including children and pregnant women, displaced.

The land guards, wielding guns and machetes, destroyed makeshift structures occupied by the residents, in an attempt to eject them from the land which is a subject of a court litigation.

During the attack, one of the pregnant women fell unconscious and had to be rushed to the hospital.

The attackers, who arrived at the scene on motorbikes, hacked and vandalised all 14 wooden structures on the two-plot land; threatening to burn down the structures if the residents refuse to leave.

The police were called in but the attackers, numbering about eight, escaped before the arrival of the police patrol team.

The original owner of the land, Nana Kwame, permitted the residents to occupy half of the land, on humanitarian grounds, while he built on the other half.

According to him, he acquired the land in 1995 from one of the Gbese families, adding that there had been no issue until recently when another family gave indication that it had won a court case over the ownership of the lands in that area.

Nana Kwame explained that the family filed a suit in court against him over the land, and as part of the settlement he decided to attorn tenancy to the new family, and pay the necessary fees.

But before they could sign the settlement agreement, the family said it had sold the land to another person, Ibrahim Sibie, popularly known as Bolumba, who also claims to have sold it to a new buyer.

Nana Kwame said he has secured a court injunction restricting Bolumba and his assigns from entering the land, indicating that he will file for contempt against him.