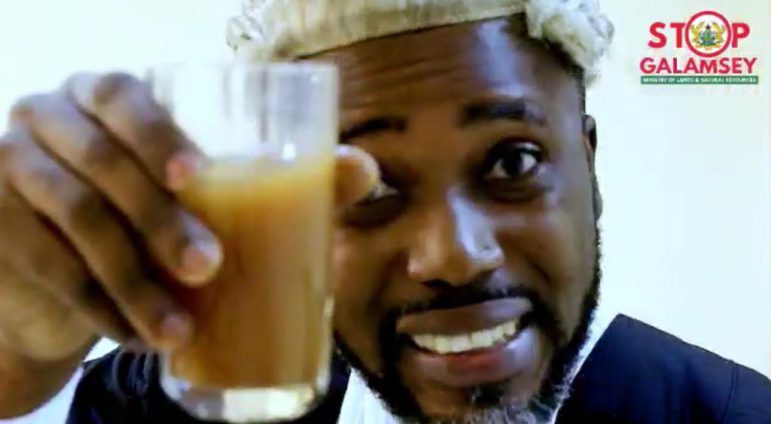 The Lands Ministry says it is committed to fighting and win the war against illegal mining, popularly called ‘galamsey’.

According to the Ministry, the battle against the menace, which appears to be complicated, can be won eventually through the collective efforts of the citizenry.

In a new drama video, an illegal miner is sentenced to 25 years imprisonment after he was caught engaging in galamsey, which caused the pollution of water bodies, making them non-potable.

The culprit in the video rejected the water he was given, saying it was not safe to drink due to its bad state.

After his sentence, the illegal miner mentioned the names of individuals in higher authority who were also involved in galamsey.

Ghanaians are being urged to stop galamsey to help save the environment and water bodies from destruction.

The video warns of the dire consequences of illegal mining, including depletion of the forest reserve and loss of lives.

The Lands Minister, Samuel Jinapor, during a tour of some mining communities earlier this year, stated that the Akufo-Addo administration is not against small-scale mining in general but rather galamsey in particular, as it had a negative toll on the country’s water bodies and forest reserves.

“President Akufo-Addo and his government are not against small-scale mining. What we keep saying is that we will not allow illegal activities to pollute our river bodies.”

“I urge any of you involved to stop because we will not condone such acts, and we will stop all such activities,” he said.

DISCLAIMER: The Views, Comments, Opinions, Contributions and Statements made by Readers and Contributors on this platform do not necessarily represent the views or policy of Multimedia Group Limited.
Tags:
Illegal mining
Ministry of Lands and Natural resources