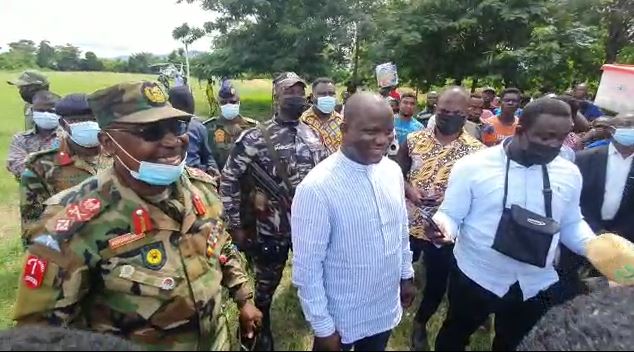 The Lands and Natural Resources Minister, Samuel Abu Jinapor has begun a tour of the county’s water bodies to assess the progress achieved two weeks after the deployment of the military task force mandated to halt activities of illegal small-scale miners.

The minister who was accompanied by some top military officials is expected to engage some community members including opinions leaders along the river bodies, particularly the Pra River, which cut across the Central, Eastern, Western and Ashanti Regions.

The Minister first stopped by Ayinam in the Atiwa East District. There, he interacted with some of the youth and asked for their support in government’s quest to reclaim the lands and also clear the polluted water bodies.

He stated that the Akufo-Addo administration is not against small scale mining in general but rather galamsey in particular, as it had a negative toll on the country’s water bodies and forest reserves.

“President Akufo-Addo and his government are not against small-scale mining. What we keep saying is that we will not allow illegal activities to pollute our river bodies,” he stated.

“I urge any of you involved to stop because we will not condone such acts and we will stop all such activities.

The youth, on their part, agreed with government’s action and blamed the menace partly on the illegal small-scale miners who deceive them to give away their lands for farming.