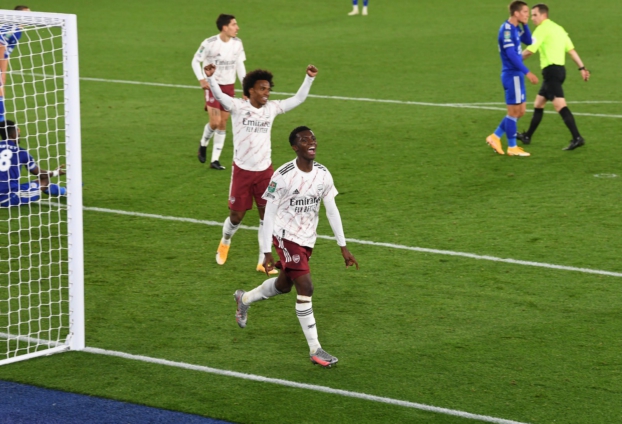 There was little Fuchs could do as Nicolas Pepe’s angled effort hit him after coming off the post and went in.

Nketiah settled the tie in the closing stages, stabbing in after fine work from substitute Hector Bellerin.

Earlier, City’s James Maddison hit the post on his first start of 2020-21.

Arsenal will play Liverpool in round four if the Premier League champions beat League One Lincoln on Thursday.

Wednesday’s result continued the Gunners’ impressive start to the season, during which they have won the Community Shield on penalties and secured back-to-back Premier League victories.

Manager Mikel Arteta made seven changes but still fielded a strong side, indicating the squad depth the Spaniard has contributed to putting together for this campaign.

That includes previously maligned club record signing Pepe, who was solid without being spectacular on Wednesday, but played a key role in the opening goal with a good run and persistence at the end of it.

He almost scored with a chip that Wes Morgan headed off the line, before he did settle the tie by prodding the ball past Danny Ward from close range.

Leicester boss Brendan Rodgers changed his entire first XI from the one that started the Premier League win over Burnley on Sunday.

Despite the defeat, there were some positives for him to take, chief among them the display of Maddison, who is still finding his feet after missing the last six Premier League games of last season with a hip injury.

As in his cameos in the Foxes’ league matches this season, he looked sharp in his attacking midfield role, regularly finding space and threatening to open up the Gunners defence.

His most striking contribution came near the end of the first half when he bought himself space on the edge of the box and spotted Bernd Leno off his line – but his curling, lobbed effort hit the post.

However, he could not influence the result, which was inevitable after substitute Ayoze Perez had headed a great chance wide just before Nketiah got Arsenal’s second.

DISCLAIMER: The Views, Comments, Opinions, Contributions and Statements made by Readers and Contributors on this platform do not necessarily represent the views or policy of Multimedia Group Limited.
Tags:
Arsenal
Arsenal FC
Carabao cup
Leicester
Leicester City