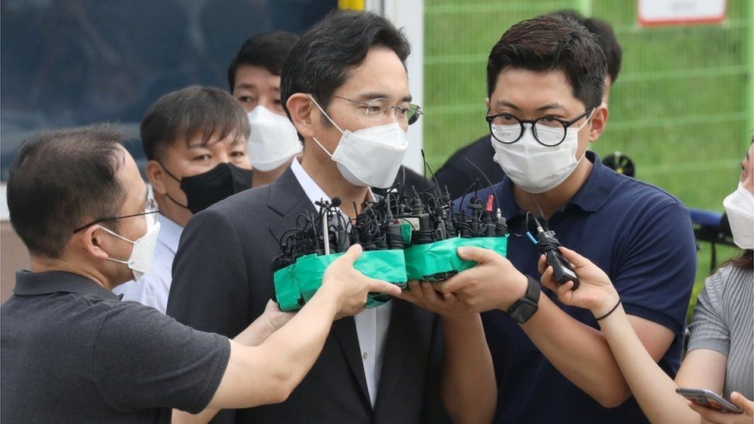 Lee has served 18 months of a revised 30 month sentence

Samsung heir, Lee Jae-Yong has been released from a South Korean prison and is now on parole.

He served 207 days in jail – just over half the sentence he received after being convicted of bribery and embezzlement in January.

The case involved the country’s former President Park Guen-Hye, who is also in jail for bribery and corruption.

Samsung Electronics was founded by Lee’s grandfather and he has been the de facto head since 2014.

Lee made a brief statement to reporters outside the prison.

“I’ve caused much concern for the people. I deeply apologise,” Lee said. “I am listening to the concerns, criticisms, worries and high expectations for me. I will work hard.”

The 53-year old was sent to prison for two-and-a-half years by a high court in January.

He was accused of paying 43bn won ($37.7m; £26.7m) to two non-profit foundations operated by Choi Soon-Sil, a friend of Park’s, in exchange for political support – alleged to include backing for a controversial Samsung merger which paved the way for Lee to become eventual head of the conglomerate.

The deal needed support from the government-run national pension fund.

At the time of his verdict, the court said that Lee “actively provided bribes and implicitly asked the president to use her power to help his smooth succession” at the head of Samsung.

The court found Lee guilty of bribery, embezzlement, and concealment of criminal proceeds worth about 8.6 billion won ($7.8m; £5.75m).

The Justice Ministry said it made the decision to release Lee after considering the effects of the pandemic on South Korea’s economy and global markets.

In a statement, President Moon Jae-In’s office said his release was made in the national interest and asked for understanding.

“We are well aware that there are supporting and opposing views on Vice-Chairman Jay Y Lee’s parole. The views of the people who are opposed are also right,” it said.

“On the other hand, there have been many people who called for his parole in this severe crisis, hoping that he will help the country with respect to semiconductors and vaccines.”

However, Lee’s parole conditions include five years of business restrictions – it is unclear if he will be able to run the company unless he gets an exemption.

He will also need approval for any trips abroad.

Lee is also under investigation for fraud and stock manipulation and if found guilty could be jailed again.

DISCLAIMER: The Views, Comments, Opinions, Contributions and Statements made by Readers and Contributors on this platform do not necessarily represent the views or policy of Multimedia Group Limited.
Tags:
Lee Jae-yong
Samsung
South Korea