Leicester knocked out of Europa League 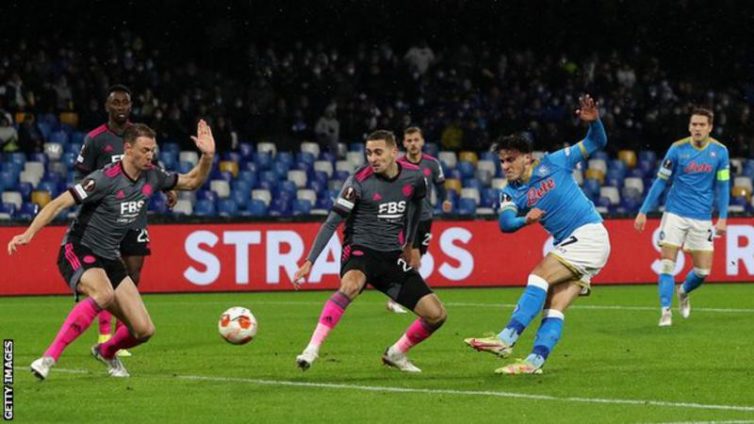 Brendan Rodgers said he does not “even know” what the Europa Conference League is after his Leicester side were demoted to the competition following their 3-2 Europa League defeat at Napoli.

The Foxes had started Thursday in pole position to advance but were made to pay for their slack defending as the hosts progressed at their expense in a dramatic climax to Group C.

Leicester drop into the knockout play-offs of European club football’s third-tier tournament in February. The draw takes place on Monday and they will face one of the runners-up from the group stages of the Europa Conference League.

“I’ve got to be honest I don’t even know what the competition is,” Rodgers told BT Sport.

“I was focused on the Europa League and winning this group and at the very least finishing second. But I am sure I will find out soon enough.”

A tense conclusion to the evening saw Leicester almost given a late reprieve because of events over 1,000 miles away in Poland, when a stoppage-time penalty was awarded to Legia Warsaw in their fixture against Spartak Moscow at virtually the same time as the final whistle blew in Italy.

A Legia equaliser would have sent Leicester through but Tomas Pekhart’s spot-kick was saved by Spartak goalkeeper Aleksandr Selikhov, to ensure his side progressed as group winners instead of slipping down to third.

Rodgers felt his side contributed heavily to their own downfall against an injury-ravaged Napoli side.

“There is a lot of naivety in our team, with a lot of young players and it has been a big demand for them this season,” he added.

“We have played a number of systems but individually it comes down to having that mentality to track a runner or stop a cross. We were good offensively but it was nowhere near good enough.”

Adam Ounas’ early goal set the tone for an error-strewn display, with Caglar Soyuncu’s ill-advised pass beginning the passage of play that saw the Algeria winger register his first Napoli goal since April 2019.

Ryan Bertrand was at fault as Luciano Spalletti’s side extended their lead, playing Andrea Petagna onside, with the forward in turn squaring for Eljif Elmas to tap home. But the Foxes responded in superb fashion, with Jonny Evans driving in an immediate response after a free-kick was only partially cleared and Kiernan Dewsbury-­Hall levelling matters with a precise left-foot volley from the edge of the penalty area.

However, another defensive lapse from a Leicester side whose last clean sheet came on the opening day of the Premier League season proved decisive.

Bertrand, Harvey Barnes and Timothy Castagne were all guilty of not marking tightly enough as Giovanni di Lorenzo picked out Elmas, who allowed the ball to run across his body before driving it into the bottom right corner.

Leicester travelled to Italy in the knowledge that several permutations, including a defeat, could have seen them advance, while Napoli knew that only a win would suffice.

And while Napoli shook off some patchy Serie A form to achieve their objective, Leicester’s struggle for consistency, and the passive defending which has become a feature of an underwhelming campaign so far continued.

On paper the Foxes’ strong starting XI, including the likes of Youri Tielemans and Jamie Vardy, looked more than capable of having the measure of a side shorn of Kalidou Koulibaly, Victor Osimhen and Lorenzo Insigne amongst others.

But there was little evidence of that on the pitch, bar a 20-minute period at the end of the first half when they recovered from that two-goal deficit.

While James Maddison struck a post and Evans emerged as the only Leicester defender worthy of credit, they have now conceded two goals or more in five of their past six matches and worryingly also have a combination of Covid-19 cases and illness in the squad to contend with.

DISCLAIMER: The Views, Comments, Opinions, Contributions and Statements made by Readers and Contributors on this platform do not necessarily represent the views or policy of Multimedia Group Limited.
Tags:
Europa league
Knocked out
Leicester City
Napoli