Let’s give peace a chance – Battor Development Association to citizens 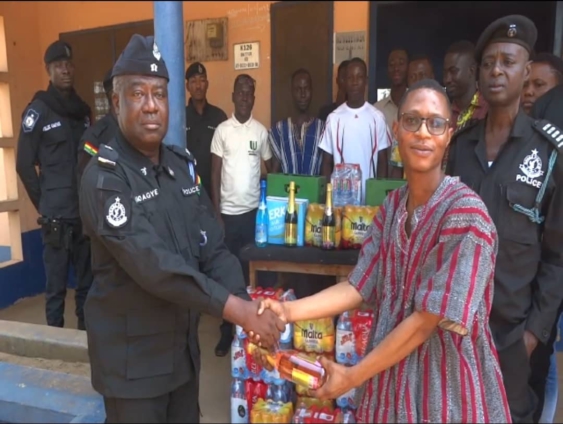 The Battor Citizens Development Association has commended the North Tongu DCE, Osborne Divine Fenu for his exemplary leadership and the Police for their dedication during the incident which led to the death of some residents in Battor.

The leadership of the Association noted that it is unfortunate that the once peaceful town of Battor was turned into a war zone resulting in casualties.

Leader of the group, Dr Collins Eli Asilevi who made the comments during a visit and donation of assorted items to the district Police noted that it is necessary to have peace returned to the Battor community for a common goal of development.

‘We sincerely sympathize with and extend our heartfelt condolences to the families, relatives and indeed the people of Battor on the painful loss of our compatriots in that gory incident. We are very pained that such a thing could occur in our Battor, known for her peaceful, welcoming and hospital nature and culture. We pray for the injured and wish for their speedy recovery.  We pray for the families and relatives of the fallen souls that the good Lord will strengthen and comfort them in these agonising and difficult times,” Dr Asilevi said.

Dr Asilevi noted that the unfortunate incident could have been prevented if they had headed to the warnings, obeyed court injunction and also gave peace a chance.

“We regret to say that, the unfortunate incident could have been prevented if we had heeded warnings, obeyed court injunction, and gave peace the chance,” Dr Asilevi said.

He admitted that the youths were carried away by the zeal, exuberance and the usual enthusiasm that greets the annual Hogbeza and that love for the festival blinded some to ignore the injunction and admonition.

“Indeed, some people deliberately took advantage of the youthful exuberance and the ignorance of the people on the consequences of disobeying court injunctions and ignoring security intelligence, and urged the youth on, leading to the painful losses that Battor certainly regrets.”

Dr Eli Asilevi urged the residents to learn from the bitter experience so it does not occur again.

He also called on the feuding factions to use due process in settling the dispute and also give peace the outmost chance and priority.

He also called on the youths to distance themselves from the issues and remain neutral.

Dr Asilevi also hoped that the issue is resolved as soon as possible and urged the Police to intensify their efforts to bring the perpetrators to book.

“We are urging the Police to intensify their effort to bring all those whose actions and inactions incited, abetted, conspired, and led to the incident to be dealt with in accordance with the laws of Ghana fairly and firmly and without fear or favour,” he said.

It would be recalled that five persons, including a citizen of Battor who is the Chief of Havorkope in Dzemeni in the South Dayi District were shot dead while several others sustained various degrees of injury.

The bloody incident follows a clash between some disgruntled members of the Dzekley Royal Family of Kpele and the stool father of the Battor Traditional area in the North Tongu District of the Volta Region.

At a press conference held on November 27, 2022, the stool father, Zikpitor Korsi Hottor announced that he has destooled the Paramount Chief of the Battor Traditional area, Togbega Patamia Dzekley VII.

The stool father alleged that the Paramount Chief had breached the customs and traditions of the area, hence his destoolment.

During a gathering on Friday, December 16, 2022 for the firing of musketry in the Battor township ahead of a festival, aggrieved supporters of the destooled Paramount Chief allegedly clashed with some supporters of the stool father which led to five people and several persons injured.

DISCLAIMER: The Views, Comments, Opinions, Contributions and Statements made by Readers and Contributors on this platform do not necessarily represent the views or policy of Multimedia Group Limited.
Tags:
Battor Development Association
North Tongu DCE