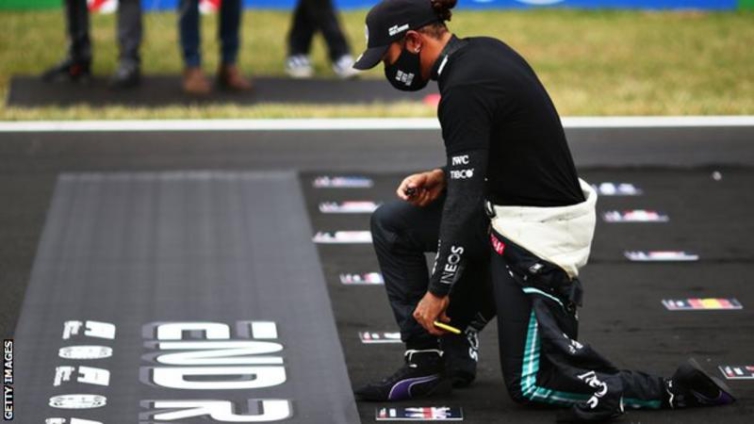 Hamilton, 35, took a knee on the grid and wore anti-racism slogans in support of the cause during the season.

The Briton’s Mercedes team also adopted a black livery for the 2020 campaign in a stand against discrimination.

Hamilton said: “I had this extra drive in me to get to the end of those races.”

He was voted as the 2020 BBC Sports Personality of the Year earlier this month after equalling Michael Schumacher’s record of winning seven World Championships and passing the German’s total of 91 grands prix victories.

On Saturday, Hamilton told historian and presenter Professor David Olusoga: “It was a different drive than what I’ve had in me in the past – to get to the end of those races first so that I could utilise that platform [for Black Lives Matter] and shine the light as bright as possible.”

Asked by Olusoga if he had been concerned about the response to his stance, Hamilton replied: “There is no way that I could stay silent. And once I said that to myself, I didn’t hold any fear.”

Hamilton was also asked by presenter Nick Robinson about racism in his sport and the fact that he is the only black F1 driver.

“There are many other young kids of colour that deserve the opportunity to progress, have a great education, [who could] be an engineer or whatever it is they want. But the fact is, the opportunity is not the same for them,” said Hamilton.

The Mercedes driver also hinted that activism might represent a new avenue for him when he retires from racing.

“The happiness and success of winning these championships is a wonderful thing, but it’s short lived,” Hamilton added.

Every year, the Today programme invites a series of high-profile guests to take charge of an edition of the show, with each setting the agenda for one day across the Christmas and New Year period.

Other guest editors this year include The Great British Bake Off judge Prue Leith and author Margaret Atwood.

As well as Black Lives Matter, Hamilton also discussed the Hamilton Commission, the programme set up in his name to increase diversity in motorsport, the power of sport to bring positive change, electric cars and animal rights.