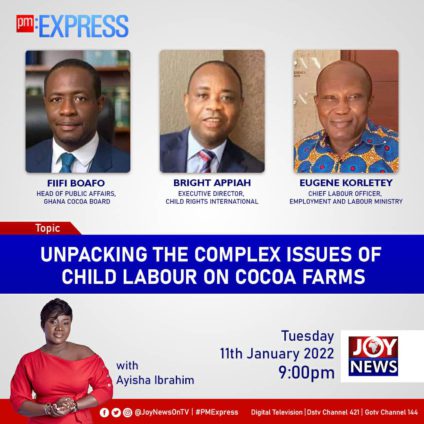 JoyNews’ documentary, titled ‘Children in Cocoa Labour’ revealed how traffickers hired out children, including 10-year-olds to cocoa farmers for as little as GHC800 to work for a full year, weeding and carrying cocoa beans.

The recent happening has triggered a lot of discussions on the abuse of the rights of children.

Meanwhile, eight farmers who were captured in the latest Hotline documentary, using children as labourers on their farms have been arrested.

A team of Police and COCOBOD intelligence officials effected the arrest after an operation aimed at bringing all those involved to book.

In that regard, JoyNews’ Ayisha Ibrahim tonight engages Head of Public Affairs of Ghana Cocoa Board, Fiifi Boafo. Executive Director of Child Rights International, Bright Appiah and Chief Labour Officer of Employment and Labour Ministry, Eugene Korletey as they discuss the topic.