Looted coin worth $1m returned to Israel after years-long hunt 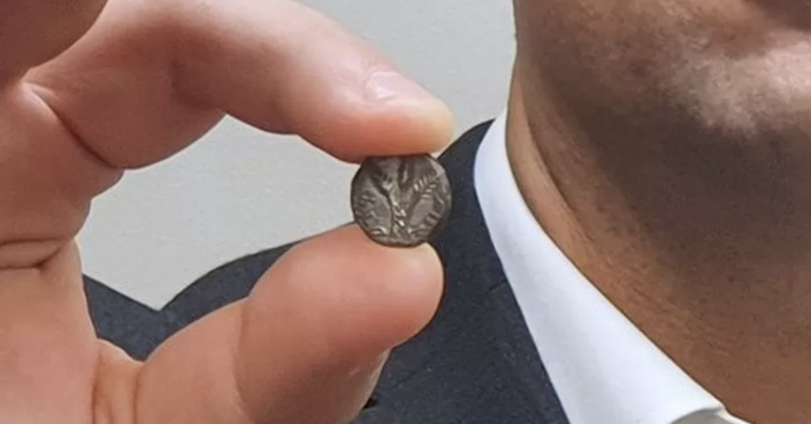 It took nearly 20 years of dogged detective work and a trail which crossed continents before the case of the missing $1m relic could be closed.

“A cherished piece of history [is] finally going home,” said a US official at a ceremony marking the occasion.

That piece of history is a small silver coin rich in symbolism, minted during a Jewish revolt nearly 2,000 years ago.

Looted in Israel in 2002, it was eventually tracked down, seized and is being returned to where it came from.

The saga began when the Israel Antiquities Authority (IAA) learned from informants that the coin had been taken by Palestinians from a hoard unearthed in the Ella Valley, south of Jerusalem.

The IAA says it spent the next decade and a half trying to locate the coin, which passed through illicit antiquities markets in Israel, Jordan and the UK. It was eventually exported to the US for sale at an auction in 2017.

The IAA alerted US Homeland Security Investigations (HSI), which then took administrative custody of the coin. The investigation was passed to the Manhattan District Attorney’s Antiquities Trafficking Unit (ATU), which obtained a court order to repatriate the coin based on information from informants in five countries along with help from authorities in Europe and the Middle East.

The coin was handed over on Monday in a ceremony at the Manhattan District Attorney’s office attended by US and Israeli officials, including Israel’s ambassador to the UN Gilad Erdan.

“Today we join our partners to return an incredibly rare piece of Israel’s history, the quarter shekel coin, a symbol of independence from the time of Roman presence in what is now modern Israel,” HSI agent Ricky J Patel told the gathering.

The silver coin, embossed with Jewish motifs, is one of only four of its kind known to be in existence. The IAA dated it to 69 AD – the fourth year of the Great Revolt.

The minting of such a coin was “in fact a declaration of independence by the Jews in the land of Israel, a statement against the mighty empire that stood before them”, said Ilan Hadad of the IAA.

The Great Revolt saw a rebellion by Jews in Judea against oppressive rule by the Romans, who had ended Jewish independence there a century earlier.

The uprising culminated with the Romans’ destruction of Jerusalem and the second Jewish temple in 70 AD.

Estimates put the number of Jews killed from hundreds of thousands to more than a million.

DISCLAIMER: The Views, Comments, Opinions, Contributions and Statements made by Readers and Contributors on this platform do not necessarily represent the views or policy of Multimedia Group Limited.
Tags:
Israel
Looted coin