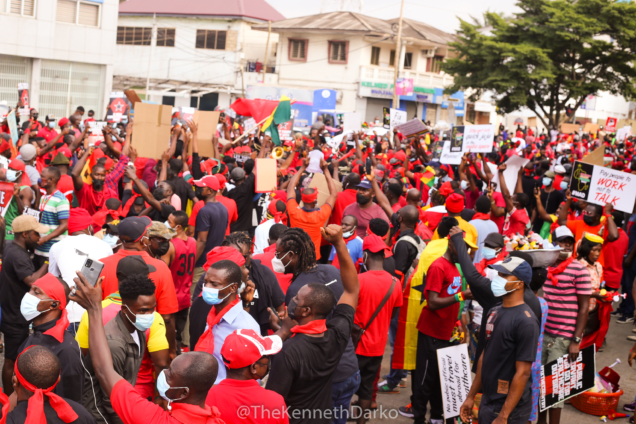 The Madina demonstration which is being convened by the Member of Parliament for the area, Francis-Xavier Sosu has been rescheduled to Monday, October 25.

The protest is to express the community’s displeasure for the devastation caused by recent heavy rainfalls which had flooded and trapped his constituents in their homes for five days.

According to him, the dire situation in his constituency following the rains is a result of neglect from the Executive arm of government.

The activity which was moved from the initial October 18 date is a result of the inability of the Regional Police Command to provide the necessary protection during the protest.

The Police in a response letter to Xavier Sosu’s notice of protest explained that “we are unable to provide security for this intended demonstration due to an upcoming Ghana Law School student’s demonstration and Regional Tour by His Excellency the President of the Republic.”

The Assistant Commissioner of Police, Eric Winful who had signed the response letter had recommended October 25 for the Madina demonstration, to which the Madina MP had agreed.

In his response to the Police, Sosu stated “Being committed to the cause of the Law students and also hopeful that the President’s Tour will take him through some of the bad roads in Madina for him not to be surprised at our upcoming demonstration, I will advise the Chiefs, Elders, and people of Ayi Mensah, Kweiman, Danfa, Adoteiman, Otinbi, and Amrahia to reschedule the demonstration.”

He said, “It seems that nothing is working in Madina, and I cannot be an MP, over an area that will not work. So if it is not working, then I will make it work.”

“That is why I am leading my people to demand from the right quarters our own fair share of national development,” he said on JoyNews.

Meanwhile, the MCE for Nkwantanang, Jennifer Dede Adjabeng has described the MP’s posture as laughable.

According to her, lawmakers contribute to the area’s development through lobbying; therefore, it is unfortunate for Mr. Sosu to resort to demonstrations to get the needed infrastructural projects for the Madina constituency.