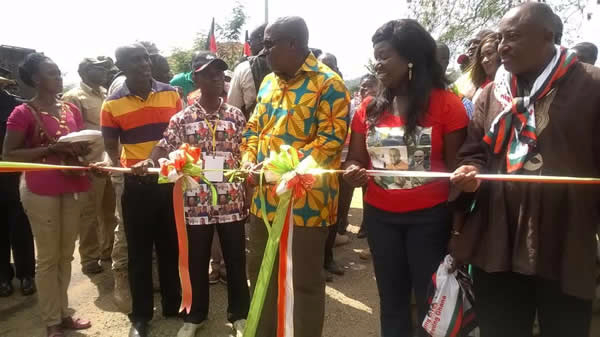 President John Mahama has commissioned the Kyebi town road which was constructed under phase one of the Cocoa syndicated road projects in the Eastern Region.

The roads, upon completion, are expected to boost the agricultural needs of the people in the region and  facilitate the carting of farm produce from the farming communities.

The President commissioned the project during his campaign tour of the Region.

The President and his entourage of Minister’s and other government officials were welcomed by teeming supporters of the National Democratic Congress (NDC) and well-wishers.

President Mahama in a handshake with the Okyehene

President closed-door a closed door meeting with Osagyefo Amoatia Ofori Panin at his Palace before joining the residents to cut the tape to officially open the Kyebi town roads to traffic.

The President,  after inaugurating the road, told a gathering at a mini-rally that his government is committed to the development of infrastructure.

Giving a background to the once deplorable Kyebi road, the President said he took the decision to fix the Kyebi road after he had gone on a private visit to the area and realized the terrible state in which they were.

The president also used the opportunity to canvass for votes.

While introducing the party’s parliamentary candidate for the area, Owuraku Amofa, Mr Mahama urged the people to retain the NDC in the upcoming December 7, polls.

The President then took his campaign tour to the Nsawam-Adoagyri constituency as well Aburi.

There, the President introduced the parliamentary candidates; Benedicta Oyoo Asante and Lawrencia Adwoa Dziwornu and urged the people to vote massively for them.