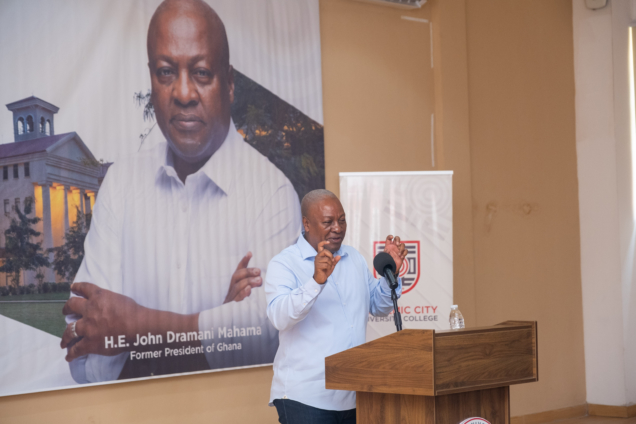 The Leadership Seminar Series was under the theme “Taking critical decisions in decisive moments as a leader”.

He also shared a number of decision points he faced as well as challenges he encountered while he served as President of Ghana.

According to him, the most challenging decision he had to take was to deal with corruption, the reshuffling of ministers and seeking assistance from the International Monetary Fund (IMF).

This, according to him is because the previous government did not pay attention to the need for generation of electricity at the same pace as its demand was rising.

“For many years, our demand for energy was growing by 12 per cent a year, we were consuming 12 per cent more energy per year. Unfortunately, previous governments were not putting in generation at the pace at which demand was rising.

“..You must forecast demand and then you must put in the generation to match the demand as it grows. Unfortunately for several years, no new power plant was put up to meet the demand and it all came to a head when I became President,” he said.

He explained that load shedding happened in his era as a result of one of the thermal plants in Takoradi breaking down.

Mr. Mahama said he accepted responsibility for the “dumsor” problem and set up an emergency committee to deal with the crisis, which was in two parts- generation and financial problems.

“We mobilised almost 500 Megawatts of power in the shortest time ever recorded in Africa. In a period of 9 months after February [State of nation address] we had the Ameri power plant producing power so we solved the generational part,” he said.

The former President accused the current government of mortgaging the ESLA.

“They have taken the money in advance and spent it and collateralised it to 2035,” he claimed.

As a result, he stated that there is the likelihood of the IMF adding ESLA to the public debt in the debt restructuring, adding that “if that is done, it will free up the ESLA money to be used to pay off the shortfall in energy debts.”

Mr. Mahama said dealing with corruption in the country has been one of the most difficult for Presidents.

This, he noted is because persons involved in the corrupt act could be closely related.

The ex-President cited an instance he had to deal with during his tenure in which the culprit was imprisoned but pardoned by government on health grounds.

Former President John Mahama said another herculean task he faced during his tenure was to reshuffle his ministers.

He said although difficult, he had to reshuffle to prevent the ministers from creating “kingdoms in the Ministry that they are.”

“In my time, I reshuffled and they were not very pleased. Of course, some of them are not my friends anymore,” he added.

Mr. Mahama has revealed that going to the IMF in the year 2014 for a bailout was one of the most difficult decisions he had to take as a president.

Nonetheless, he stated that the programme helped to balance the country’s books and restored the economy “but unfortunately this government came and borrowed and brought it to a ditch.”

DISCLAIMER: The Views, Comments, Opinions, Contributions and Statements made by Readers and Contributors on this platform do not necessarily represent the views or policy of Multimedia Group Limited.
Tags:
Academic City University College
Leadership Seminar series