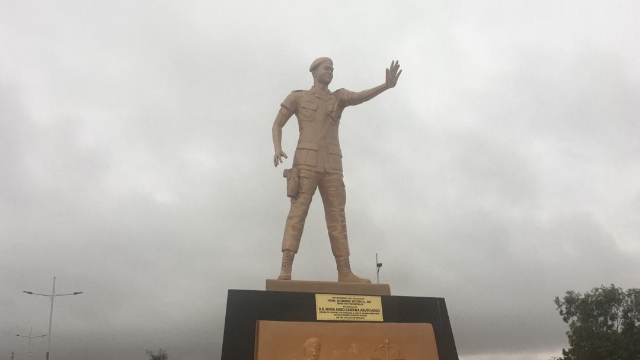 A huge monument goes up today in Accra, immortalising the soldier who went down fatally via barbarism of a mob in the Central region in 2017.

The Major Maxwell Adam Mahama statue stamped into the Airport Hills Roundabout in Accra, looking down on motorists as they return the look more contemplatively.

Residents in the high-end location of the monument have been sharing their good feelings about the statue.

It will be a source of reflection, a resident told myjoyonline.com.

The unveiling marks exactly two years since Ghanaians learnt to their horror that, the young Captain with the 5th Infantry Battalion had been clobbered to death in Denkyira Obuasi. He was stationed there to check the menace of illegal mining.

The Ghana Armed Forces on Monday announced that the government had approved the naming of the roundabout near the plush Airport Hills in Accra, after slain soldier, Major Maxwell Adam Mahama.

Mrs Esi Gbedemah, together with her husband, Kofi Gbedemah, named the land located about 10 minutes’ drive from the Kotoka International Airport as Airport Hills when they started developing the community sometime in 1995.

”Actually, that roundabout was never officially named Airport Hills roundabout. It was referred to as such because of its proximity to Our Airport Hills,” Esi revealed in a chat with Myjoyonline.

This was even years before the roundabout came into existence following government decision to construct the road from Congo Junction at Burma Camp through Airport Hills to the Flower Pot Junction on the Spintex Road, to serve as alternative routes for residents of La, Teshie Tebibianor and Teshie.

Vehicles that ply that road between 3pm-7pm –considered peak hours- each day, run into tens of thousands not to talk about the occupants.

“On behalf of residents of Airport Hills, I want to thank the Ghana Armed Forces and the Minister of Defence for the recognition and invitation to the unveiling ceremony,” Kofi Gbedemah expressed appreciation.

Although not many people are familiar with that section of the road, especially due to the fact that not too many commercial vehicles ply that road, Mr. Gbedemah is hopeful that a lot of people will get to see the monument over time.

DISCLAIMER: The Views, Comments, Opinions, Contributions and Statements made by Readers and Contributors on this platform do not necessarily represent the views or policy of Multimedia Group Limited.
Tags:
Major Maxwell Mahama