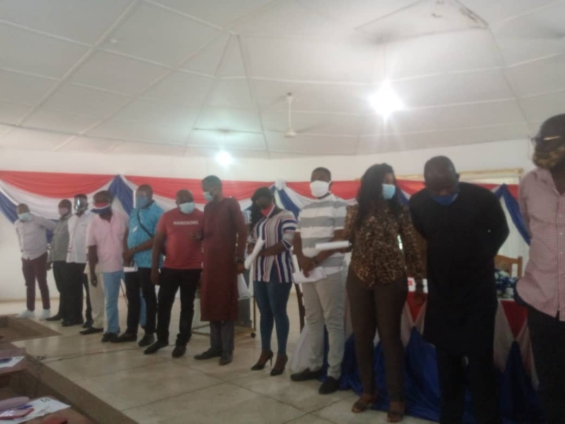 The Volta Region branch of the New Patriotic Party (NPP), has inaugurated a 29-member campaign team under the leadership of its regional Chairman, Makafui Kofi Woanya for the 2020 general election

The team’s duty is to make sure that the party’s presidential candidate, Nana Addo Dankwa Akufo-Addo, wins massively in the upcoming December elections as well as ensure the party secures more parliamentary seats in the region.

The National Organiser, Sammy Awuku who inaugurated the campaign team urged them to do more to retain the NPP led government to continue serving the country.

According to Mr Awuku, the NDC claims that the Volta region is their World Bank but they only remember the region during elections and when they (NDC) needs the help of the region

“The Volta Region is like a woman who is remembered at the middle of the night by the NDC even though they claimed it is their World Bank,,” he said

He said the country needs leaders who can continue to work hard amid Covid-19 and not just people who talk without action. Sammy noted that the NPP is focused on a surgical campaign to redeem the people from poverty and continue the good works started by the government

He urged them to be tough, resilient and vigilant in order to achieve victory on December 7.

“I encourage you to go out there and campaign for victory,be resilient, vigilant and focus and let’s win together in December “Mr Awuku urged .

Speaking further, he stated that the NPP would not accept any intimidation by the NDC but will do their best with the help of God to retain power.

Volta Region Chairman of the NPP, Mr Makafui Kofi Woanya commended the Ketu South MCE and the constituency executives for making sure that foreigners were prevented from registering in the just ended voter registration exercise

According to Mr Woanya, who is the leader of the campaign team, the party is working hard and truthfully to retain power and continue with the many development projects and policies of the government.

He urged members of the party to offer a helping hand to the team by campaigning vigorously for the party’s victory.

“I congratulate the Ketu South MCE, Elliot Edem Agbenorwu, the Ketu South constituency executives led by the chairman Petit Haligah for making sure that aliens and foreigners were prevented from registering. I want to urge you all to go out and win people over for the party’s victory, go from house to house and campaign for victory” Mr Woanya said at the event.

Deputy Volta region Minister, Pastor Johnson Avuletey noted that the NPP in the region has a very hard-working leadership and together with the Regional Minister and himself , there is a sure sign of victory for the party.

The minister encouraged every member of the party to work hard towards victory. “Go out there and make sure that each day, you win two souls for the party so that we can celebrate victory on December 7th,” Pastor Avuletey encouraged.

Regional Secretary, Joseph Hormenyah who is also a member of the campaign team said the NPP in the region indicated that he is more than ready for victory.