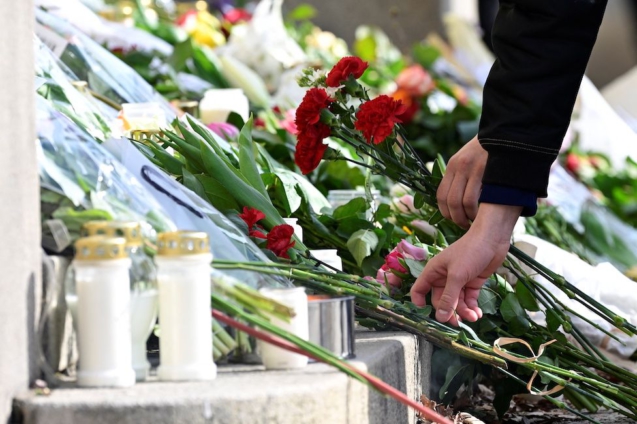 Floral tributes left outside the school in Malmo

A string of violent attacks at schools in Sweden has a nation not used to such tragedies now looking for answers.

Last Monday, two teachers at a popular waterfront secondary school were stabbed and died from their injuries. An 18-year-old pupil who confessed to the crime was arrested and remains in custody.

“You know it can happen intellectually, but you don’t think it will,” says Marie Wall Almquist, who chairs the Malmö branch of The Swedish Teaching Union. She was working from home and wrapping up what was supposed to be her last online meeting of the day, when a news alert about the attack popped up on her mobile.

Her team sprang into action organising crisis support for its members, and she’s barely come up for air since. “At the school they are in shock and sorrow. And I think the whole town is in a state of sorrow.”

Despite the global popularity of Nordic Noir crime dramas – including Netflix’s Quicksand, which is about a fictional school massacre – fatal violence amongst young people in Sweden has historically been incredibly rare. Until seven years ago the country hadn’t experienced a single school attack since 1961, when a teenager opened fire at a dance inside a gym.

And, even taking into account a recent increase in lethal shootings, the country’s overall murder rate has long been well below the global average, and similar to neighbouring Finland and Denmark, according to EU crime statistics.

All this means the violence Malmö has rarely been out of the headlines all week. The story led television bulletins, a rarity in a month where developments in Ukraine have dominated the Swedish news agenda.

Newspapers wrote minute-by-minute updates on the latest developments. One young reporter who studied at the school and was taught by one of the teachers killed wrote a tear-jerking column about his struggle to control his emotions as he covered the story.

But amidst the sense of shock and disbelief, there were also reflections that the violence appeared to be part of a small but worrying trend.

In 2015, a 21-year-old wearing a Darth Vader-like mask marched into a school in Trollhättan in west Sweden and killed a pupil and a teacher with a sword in a racially motivated attack that made global headlines. And over the past 15 months there have been three school attacks, in addition to Monday’s stabbings.

Last August, in Eslöv in southern Sweden, a 15-year-old student with Nazi sympathies seriously injured a teacher. In January, a friend he had met online was arrested following a similar attack in nearby Kristianstad in which a pupil and a teacher were injured. A year earlier in Varberg, south of Gothenburg, a 25-year-old walked into his former school carrying an axe and a knife, injuring a pupil.

“It’s a worrying development. And it’s not just in our region,” says Ms Wall Almquist. “We know that teachers are afraid and worried. And our latest surveys show that violence and threats towards teachers have increased. And it’s totally unacceptable.”

As investigations into this week’s school attack continue, police say the suspect has confessed but not revealed his motive. However experts studying the recent uptick in school violence say Swedish perpetrators tend to have similar profiles to those involved in other attacks around the world.

“Most of them are suffering from a rather long period of social psychological disorder, and it is very common that they have difficulties in getting peers, becoming part of groups,” says Christer Matson, an pedagogy lecturer at the University of Gothenburg who’s also researching right-wing radicalisation.

“We also know that they, in many cases, are active on particular internet forums where they share fantasies of violence, racism or anti feminism.”

He says it’s too speculative to draw any conclusions about potential links between the latest school violence and any recent societal shifts in Sweden. But he believes it’s clear that right-wing extremists have “made use of” the Nordic nation accepting record numbers of immigrants in recent years in their propaganda.

And, despite Sweden’s global reputation for championing gender equality, anti-feminism and bigotry are also common themes in the kinds of forums attackers and their sympathisers are often part of.

“Since I do follow the [radical online] forums, I see that there are quite a number of people posting messages related to this last event, explaining it by ‘the boys in Sweden… are feminised and are not allowed to be boys.’ So this is a discussion that we obviously need to have.”

Sofia Wikman, an associate professor in criminology at Gävle University and former news journalist, suggests that Covid-19 may also have had an impact.

Swedish teenagers didn’t experience the same level of social isolation as those in many countries, since schools largely remained open. But, she says, the pandemic nevertheless “fired up traffic on the internet” and accelerated an “inevitable” trend for isolated teenagers increasingly connecting on global message boards that celebrate previous attacks.

Last year it emerged that the student behind the stabbings in Eslöv had expressed sympathy for Anders Breivik’s shootings at a summer camp for young Norwegians in 2011, and the 2018 mosque shootings in Christchurch, New Zealand.

As Malmö struggles to come to terms with last week’s attack, the violence has reignited political and social debates about whether enough resources are available to help vulnerable teenagers.

Despite Sweden having a strong welfare state by international standards, there have been cuts to social welfare services since the 1990s, which may have reduced the opportunity for early intervention to help those “living on the edge”, argues Ms Wikman.

“We perhaps did not catch these young people who had a need for [extra] care… people who carry out school attacks or people who end up in gang crimes or as drug addicts and so on.”

On the right of the political spectrum, there are renewed calls for tougher punishments for violent crimes, easier exclusions of troubled teenagers, and the introduction of weapon detectors at school gates, says Ms Wikman.

In the meantime, both teachers and academics are worried about the risk of copycat violence. “My concern is that attacks like these will inspire others to conduct similar attacks,” says Matson. His research into violent extremism already suggests a tendency for Swedish criminals to follow national trends.

Marie Wall Almquist is worried too. She’s still struggling to come to terms with what happened last Monday evening, when she assumed she’d just be shutting down her laptop, and sitting down to a quiet dinner with her husband.

“The evening, it became different. Very different. I don’t want such an evening again.”