Mampontenghene leads Kwabre residents in protest against NPP over neglect 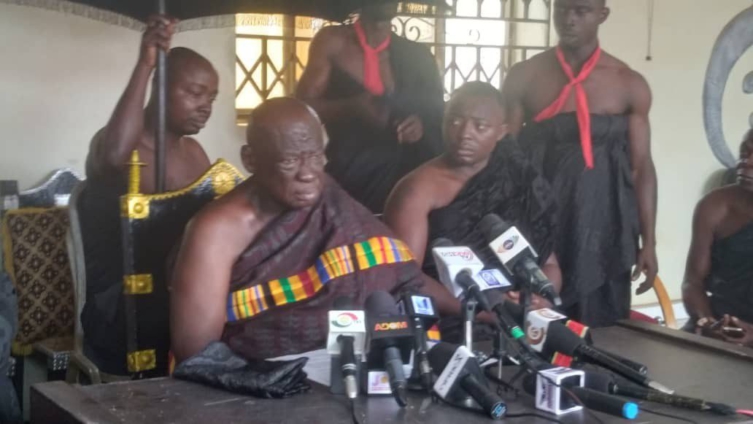 Mampontenghene, Barima Saasi Ayeboafo II, has led the people of Kwabre in the Ashanti Region to register their displeasure with the government over the lack of infrastructure development in the area.

Constituents of Kwabre East Constituency cite the deplorable state of their roads, lack of health facilities and school blocks, market places among issues confronting them.

Speaking to Nhyira FM’s Nana Jantuah on Kuro Yi Mu Nsem, Barima Saasi Ayeboafo II said the people of Kwabre are unapologetically inclined to the NPP for which region the district’s neglect is bafling.

Despite this effort, Mampontenghene says he cannot point to one thing the NPP has done for his people since they came into power in 2016.

“Kwabre East, I have already said that even if you cut our thumb we will use our tongue to vote for the NPP. NPP has bathed us and we have done that for many years. We gave the NPP over eighty thousand votes in the 2020 election but I cannot point at one thing the New Patriotic Party has done for the people of Kwabre”.

Barima Saasi Ayeboafo says in 2019, President Nana Akufo-Addo cut sod for the construction of roads at Kwabre. But after the 2020 elections, no machine has been on site.

He is unhappy that the NPP, which is so much loved by the people, has neglected their developmental needs.

Mampontenghene says he has kept quiet for a long time. He wants to see development in the area before Election 2024.