Manasseh Azure Awuni: Why you can’t be Despite, despite your hard work 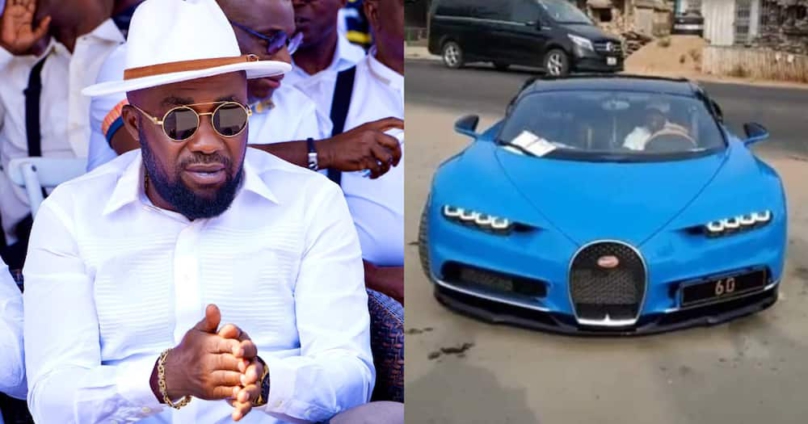 The Chairman of the Despite Group of Companies, Osei Kwame Despite, knows how to get tongues wagging. He appears to have monopolised mastery of the script on displaying opulence and setting the agenda without opening his mouth.

The other day, it was a housewarming. Yesterday, it was the marriage ceremony of his son. (Take the guests to list out and what became known as Despite’s son’s wedding could rival the British royal wedding in grandeur.) And today, it is his 60th birthday celebration.

The occasions may be different. But the reactions are often the same on social media, hairdressing salons, offices, markets and in homes.

Beyond these occasional outbursts of mixed reactions that greet the periodic showmanship, however, there is a permanent feature in conversations around a certain residential address in Ghana’s capital.

Anyone who drives or leads another on a certain street in Accra’s East Legon and does not say, “This is Despite’s house,” must be blind or ignorant of the occupant of the house. Or, perhaps, both of them already know that’s Despite’s house.

If that house is breathtaking, the collection of luxury vehicles with customized number plates has often been the magnetic field for curious eyes that find themselves inside the magnificent walls of the Despite estate.

There are often three major talking points about Kwame Despite and his wealth.

The first often comes from people who are genuinely happy for him and feel inspired to be like him. They share the videos and photos and praise him for his hard work and what he has been able to do with his life.

There is also the second group that thinks that individuals and churches should receive more scrutiny on how they spend their money than even the government to which they paid their tax. Such people say he should have used those monies to help the poor instead of using them to buy luxury vehicles and others.

The problem with this group is that their moral argument is highly subjective. The definition of luxury is not universal. What one considers luxurious might be due to their level of income. There is someone who finds DSTV subscription absurdly unnecessary. Why pay so much to watch TV?  To another, however, the subscription is a necessity.

Even if luxury had a universally acceptable definition, it might not be possible to solve all problems of poverty when the rich share all their wealth amongst us. Last year, the CEO of Tesla, Elon Musk, challenged the United Nations’ World Food Programme to say exactly how it would spend $6.6 billion to combat world hunger.

The Director of the WFP, David Beasley, had challenged billionaires in a CNN interview to “step up now, on a one-time basis” to help combat world hunger. He mentioned the world’s two richest men: Elon Musk and Jeff Bezos.

According to a CNN report, Beasley said giving $6 billion, or 2% of Musk’s net worth, could help solve world hunger. Musk said he was ready to give the money if the UN agency said exactly how it would use the money.

It is yet to be seen if the WPF has satisfactorily responded to Musk, but even if that money is given, it would not cure world hunger. The rich should not be blamed for the world’s poverty just because they are rich.

There is a way to hold the rich like Osei Kwame Despite accountable. People are right to ask whether they pay the right taxes. Do they pay their employees’ salary and pension contributions? Do they comply with the laws in their business without hurting society or violating the rights of others?

Beyond these, the likes of Despite engage in a number of humanitarian activities such as the building of health facilities for government institutions among others.

If they do all these and decide to shop in space with the profits they make, one cannot fault them. Reminding them about the poor is like asking why Ebenezer Presby Church in Mamprobi has paved its vast compound when other Presbyterian congregations in the area do not have decent places of worship. (Manasseh and this his mouth! Anyway, it is everywhere, isn’t it?).

The third and final leg of the discussion which often arises any time Despite displaying wealth is the stray bullet the “poor” receive from those who pass commentary. Despite doesn’t go about bragging and insulting people with his wealth like some known men in our republic with very low self-esteem.

Poverty, like wealth, is subjective. The fact that Despite has bought a Bugatti worth $3million in 2022, doesn’t make you poor because you drive a 2015 second-hand Elantra, which was auctioned in the US after an accident and revamped in ‘Kokompe’.

The fact that Jeff Bezos is worth $183billion does not make Despite poor because Despite’s net worth may not be up to a billion. The definition of a rich man in Bongo might be vastly different from what makes someone a rich man or woman in East Legon. Unnecessary comparisons and passing derogatory or unrealistic commentary on the wealth of others is problematic.

That is the negative aspect of the Despite-inspired conversations, which isn’t his fault anyway. They inflame the already disturbing get-rich-quick or get-rich-without-work attitude among the youth of today. Statements such as “Money stops all nonsense” and “Make money so that your children can also have weddings like this” can be counterproductive.

The nation was horrified when two teenagers recently murdered a 10-year-old boy for money rituals. Where do we think they got their ideas from? Celebrating wealth and denigrating people who are not rich point the youth to only a one-directional sign of success—money.

Life has no rigid formula, but it follows some set of principles. There is a process of getting to the top or becoming rich. Those who are celebrated today or display opulence today spent years of obscurity in the trenches. There are exceptional cases of people hitting jackpots and getting rich without much hustle.

There are also stories of people who have worked hard and diligently all their lives without much to show for it in terms of wealth. We should accept and teach the fact that not becoming like Despite doesn’t signify failure.

There are nobler feats in life to which people must aspire beyond the digits of one’s bank account. Success and happiness in life do not only come from wealth. Fulfilment must not be measured in currency notes.

People must know that it isn’t possible for a majority of us to become like Despite. Many of us cannot become like Despite even if we work harder and smarter than him. Despite started in a dispensation that is different from ours.

If Joy FM and Peace FM were set up in 2022, they might not be brand leaders and English and Akan radio in Ghana. Those who built their wealth from operating internet cafes have no business today. Each generation has its own opportunities and limitations. And within every generation, people have different ambitions and purposes to which God assigned them.

Beyond that, we should not define success only in monetary terms or in certain digits of wealth. I do not need $1 million to be successful or to say I’m rich. If I’m running for President or starting a multimillion-dollar business, I may need that amount.

The reality is that I may never make that amount in my lifetime. But would I be considered to have lived an unfulfilled life?

Not all of us were born to be as rich as Despite or famous as Osei Kwame Despite, so we must learn to manage our expectations and know our purpose in life.

The Usman Agures, the Gyane Augustines, the George Achibras and many others were teachers in a deprived district of Kete-Krachi so that some of us can come out of those abysses of hopelessness and take national and international spotlights in our respective careers.

They were not rich men or women. But we are because they were. As far as I’m concerned, they are successful. That was what Martin Luther King Jnr conveyed in his 1967 speech at the Barratt Junior High School in Philadelphia titled, “What is your life’s blueprint?” In that speech, he said:

When it is all said and done, we will leave this world without anything. We will be reduced memory. History does not accord timeless and abiding memories to only the rich.

The Martin Luther Kings, the Mandelas, the Gandhis and their ilk are not remembered for how rich they were.

It will be good to become rich. But you may never become a Kwame Despite. But you can become a Mother Theresa, Mandela, Gandhi or Martin Luther King Jnr. in your family, community or country.

Your currency must not always be a legal tender.