Manchester United 0-5 Liverpool: ‘This was a terrible mismatch and Solskjaer has to take blame?’ 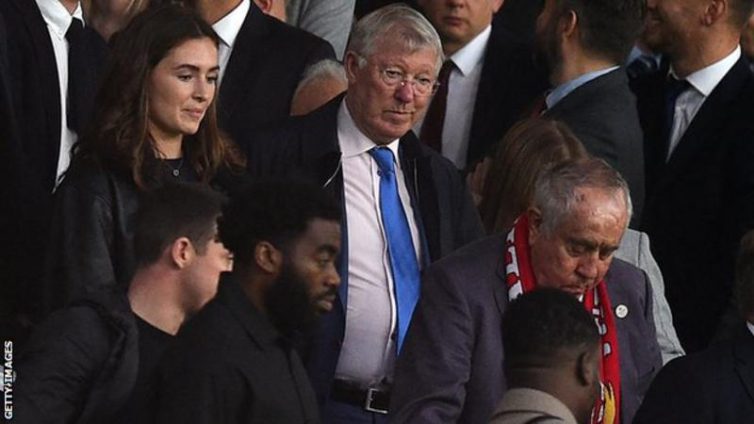 The mood of this remarkable day was captured to perfection by the sight of Sir Alex Ferguson puffing out his cheeks with a face like thunder, while Sir Kenny Dalglish sat a few seats away sporting a smile that looked like it might have to be surgically removed.

The meeting between Manchester United and Liverpool, and this was the 208th, carries consequences.

As the shockwaves of this match reverberated around Old Trafford, the question is whether this result will carry more than most.

There was a sense of reckoning about this 5-0 Liverpool victory. It was on such a scale and such an embarrassment that it means Ole Gunnar Solskjaer’s sympathisers will have an even tougher job claiming the Norwegian manager is up to the task of making Manchester United a serious force once again.

Solskjaer, sadly, looked out of his depth as a United manager alongside Liverpool’s Jurgen Klopp.

Klopp stalked the touchline constantly, never satisfied for a second as he delivered regular verbal volleys to his players even when they were five up, while Solskjaer sat in his seat looking shell-shocked and lost.

Liverpool looked light years ahead of United in every aspect of the game. Management. Coaching. Organisation. Tactics.

Klopp has fashioned a formidable unit during his six years in charge while winning the Champions League and the title – while United are a fly-by-the-seat-of-your-pants affair.

The gap is vast. Liverpool will be right in the title fight along with Chelsea and Manchester City while United will just have to hope to finish in the top four.

And yet should it actually be like this? Should the gap be as wide as it looked at Old Trafford?

United’s team is full of talented players, as it should be given that Solskjaer has spent £400m, but do they look any closer to Liverpool? Not on this evidence.

United’s tactical plan, and thus Solskjaer’s, looks very much a case of hoping one of his selection of attacking riches comes up with something. Hope and pray. There is no obvious structure or shape.

Solskjaer’s team is a collection of talented parts which he shows no sign of bolting together into a coherent unit. In opposition at Old Trafford was the very definition of what United are not.

It all came together horrendously for United when Diogo Jota made it 2-0 to Liverpool. Harry Maguire and Luke Shaw crashed into each other, allowing Trent Alexander-Arnold to deliver the perfect cross for the Portuguese. The pair have proved reliable for England but this is not the case with United.

Solskjaer has had backing from United’s hierarchy. Here £73m Jadon Sancho was on the bench while £89m Paul Pogba appeared fleetingly as a half-time substitute before getting himself sent off 15 minutes later for a very poor challenge on Naby Keita.

This was a terrible mismatch, Liverpool’s ruthless streak sensing instantly that here was an opportunity to rub their great rivals’ noses in it. And they did it quite magnificently, unforgivingly.

It was the first time United have lost by five goals at home without scoring themselves since defeat to Manchester City in February 1955 under Matt Busby.

Liverpool is back to their best after the trauma of injuries and loss of form last season. This was the Liverpool that won the title at a canter in 2019-20. They will not win it at a canter this time – Chelsea and Manchester City are too good for that – but what a threat they will be.

And at the head of it, on the pitch at least, is the peerless Salah, now on a par with any player on the planet, a seemingly unstoppable force with his hat-trick meaning he scored for the 10th consecutive game.

It is that sense of team, however, that sets Liverpool apart. They have the individual brilliance of Salah and so many others but they are welded together tightly.

United have plenty of talent but nothing that pulls it all together. This is the job of the manager and at the moment it is beyond Solskjaer.

Klopp, on the other hand, seems to get every big decision right.

When Liverpool’s teamsheet landed before kick-off, it was missing the influential Fabinho through injury while Klopp left out Sadio Mane to bring in Jota and £35m summer signing Ibrahima Konate was selected ahead of Joel Matip.

Eyebrows raised? Yes, but not for long as Jota scored and was a menace throughout while Konate looked perfectly at home alongside Virgil van Dijk, although he will have harder days than this.

For all the deserved praise delivered in the direction of Klopp and Liverpool, the hot topic with supporters in and around Old Trafford was the future of Solskjaer and whether this was the sort of result a Manchester United manager can come back from.

It was so chastening that many fans left at half-time and they were swiftly joined by the second shift when Salah made it 5-0 five minutes after the break.

United was dreadful when they lost 4-2 at Leicester City eight days ago but this was far worse, far more damaging. It will take a long time for anyone at the club to forget this – and if they do Liverpool fans will happily be there to remind them.

There was optimistic pre-game talk that the sight of Liverpool would inspire Solskjaer and United’s players to offer something in the way of serious substance. Instead, they shrunk in front of the challenge. It was an embarrassment.

Solskjaer, in his third full season, is now under more pressure and scrutiny than ever. United’s hierarchy has been emphatic in their backing but, after the harrowing 90 minutes they suffered at Liverpool’s hands, would it be such a surprise if the thinking changed?

Of course, sacking Solskjaer is easily done but finding a quality replacement is not.

Antonio Conte is available but comes expensively and is high maintenance while the best of the rest are pretty much taken. The much-admired Mauricio Pochettino is at Paris St-Germain.

And to inflict a further wound on United, the best are taken by Liverpool, Manchester City, and Chelsea – both Klopp and Guardiola were somehow allowed to escape their grasp and end up in the arms of their fiercest rivals with devastating effect. Thomas Tuchel has already won the Champions League at Chelsea in less than a year.

This looks like a United management and team that has lost its way.

Liverpool’s thrashing put it all into sharp relief and now the question is how long Solskjaer will be allowed to stay at the wheel in the hope of finding a direction.

DISCLAIMER: The Views, Comments, Opinions, Contributions and Statements made by Readers and Contributors on this platform do not necessarily represent the views or policy of Multimedia Group Limited.
Tags:
Liverpool
Manchester United
Ole Gunnar Solskjaer