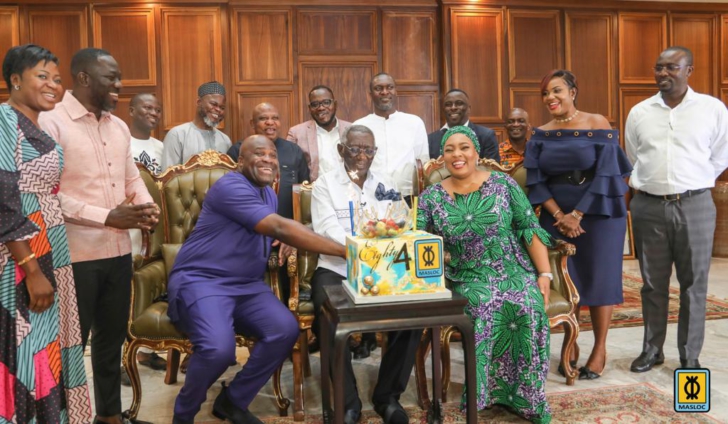 The Chief Executive Officer of MASLOC, Abibata Mahama led the Management of the institution to pay a courtesy call on the former President of the Republic of Ghana.

The CEO who was accompanied by Deputy Chief of Staff Emmanuel Adumua-Bossman, informed the former president that their visit on the celebration of his 84th birthday was to thank him for his vision and being the brain behind the establishment of MASLOC.

In addressing the Former Statesman, the CEO of MASLOC said the idea for the creation of the institution was a very laudable one, and though all expectations for the institution has not been fully achieved she is still keen on leading it to become better.

She went on to say that since taking over as CEO, she has toured the institution’s offices in all 16 regions of the country and implemented new reforms that are helping in sustaining MASLOC as a viable business.

She emphasized that the issue with MASLOC has always been the false notion that it was founded for political gains, which she is trying hard to debunk and that MASLOC continues to rely primarily on GoG financing, which is frequently insufficient to meet the high volume of applications received.

The CEO outlined actions, such as soliciting grants to augment GoG funding and the engagement of independent debt collection specialists to support leadership’s initiatives aimed at safeguarding the institution’s revolving fund.

With the news that MASLOC had been named the sustainable project financing brand of the year at this year’s Ghana Credit Excellence Awards, Madam Mahama reassured the former President of her resolution to make the institution sustainable.

The Deputy Chief of Staff also recognised the former President for his efforts in creating MASLOC and how everyone across the country is still benefiting from the seed he sowed sixteen years ago.

Former President John Agyekum Kufuor appreciated the CEO and deputy chief of staff for their visit and the decision to recognize him on his birthday as part of the company’s 16th-anniversary celebration.

The former president mentioned that the true motivation for the formation of MASLOC was for social intervention purposes and not political gains, as many people assumed. He credited the institution’s concept and success to the late Mrs. Gladys Asmah, a Ghanaian politician, businesswoman, and former Minister for Women’s Affairs under his government.

He stated that he was sure of the idea’s effectiveness since he witnessed Madam Asmah’s implementation of such programs in her distribution of micro-loans to market women to help them build their small enterprises during his campaign in the year 2000.

The statesman further implored the CEO to be committed to the real motives behind its creation and continue to uphold its core values.

He reiterated that the creation of MASLOC was to be a government tool to serve every citizen of Ghana regardless of their party affiliations and support. He stressed that a deviation from that will be a betrayal of the vaunted vision and value system for which the institution was formed.

The former President reminded the CEO of the relationship that existed between him and her late father in the years 1969 to 1979 when they were both elected and re-elected as Members of Parliament and also appointed Ministers of State.

He recalled the remarkable and notable achievements of the revered former minister of state and Member of Parliament; Alhaji Shanni Mahama from Yendi and urged the CEO to emulate these traits in leading MASLOC at this time.

Regarding MASLOC’s loan beneficiaries, he added that the institution should continue to take steps such as proper feasibility studies and other training support schemes to assist the beneficiaries in maximizing the proceeds of their businesses and enhancing their ability to repay these loans on time so that others in the queue can benefit as well.

Masloc presented a citation in recognition of the former President’s contribution as a transformational leader and for his human-centered governance.

DISCLAIMER: The Views, Comments, Opinions, Contributions and Statements made by Readers and Contributors on this platform do not necessarily represent the views or policy of Multimedia Group Limited.
Tags:
birthday
Former President John Agyekum Kufuor
MASLOC