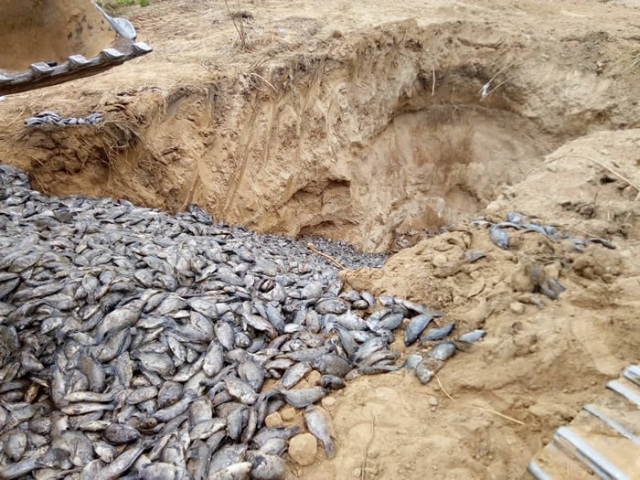 The Ministry of Fisheries and Aquaculture Development has begun a mass immunization of fish farms in the country to fight the Infectious Spleen and Kidney Virus diseases in fish.

The exercise follows the mysterious losses of tilapia in fish farms along the Volta Lake. The Asutuare area in the Shai Osudoku District recorded one of the largest viral outbreaks in October 2018.

The vaccination is being done by injecting the abdomen of the fingerlings.

The Infectious Spleen and Kidney virus predominantly cause disease in a variety of freshwater fish and leads to high mortality of fish.

Fish infected with the disease often remain on the bottom of the tank and have a reduced appetite for food.

Lethargy and respiratory distress (rapid movement of opercula) can also be seen. Towards the later stages, high mortality of between 50 and 100 per cent is seen.

The Minister of Fisheries and Aquaculture Development, Mrs Elizabeth Afoley Quaye, told journalists at Forsell Farms, a fish farm at Kpotame, near Sogakope, last Monday that the exercise had become necessary due to the importance of the sector to the economy.

Ten vaccinators are carrying out the exercise with each expected to vaccinate 1,500 fish a day, totalling 150, 000 fish vaccinated in a day.

Mrs Quaye said it was the ministry’s expectation that the exercise would cover a large number of farms in order to stop fish dying, adding that the state intervened to ensure there was no further break.

According to her, outbreaks such as the one that occurred could wipe out farms if not handled well and would lead to economic and social losses as several people could lose their livelihoods.

She disclosed that already, so fish farms had folded up with accompanying job losses due to the outbreak.