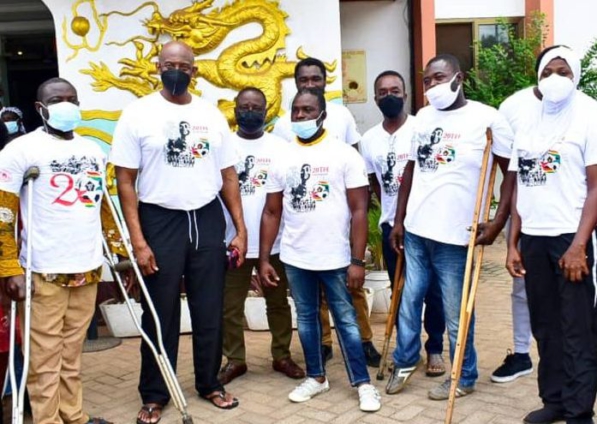 Persons With Physical Disabilities (PWDs) have joined other sports fans and Ghanaians, in general, to mark 20 years since the Accra stadium disaster that claimed over 126 lives during a soccer game between rivals Accra Hearts of Oak and Asante Kotoko on May 9, 2001.

The PWDs, Ashanti region chapter, joined Herbert Mensah, champion and founder of the May 9, Charity Foundation in Kumasi over the weekend to remember the historically sad day in Ghana’s football history and also to share memories of the day.

The occasion also brought smiles on the faces of the persons with disabilities who received charity donations of food items, cash, wheel chairs and other walking aids to make their lives more comfortable.

Although the May 9, Foundation started with the aim of directly supporting those affected families of the Accra stadium disaster to cope with their pain and suffering, it has now expanded its charity activities to cover other needy groups such as the PWD, fire victims, flooding victims as well as sick children in need of medical assistance and alleviation of their suffering.

The persons with physical disabilities have over the years taken part in yearly activities organized by the May 9, Foundation to mark the yearly remembrance of the Accra stadium disaster.

This is informed by the PWDs understanding of the suffering and their empathy with those who lost family members during the historic sports disaster and other national disasters.

As poor and marginalised people, the persons with physical disabilities have come under the wider network of the May 9, Charity Foundation working to help and support all persons in distress situations as much as possible.

According to Mr Mensah and his team, the PWDs are a major part of the work of the Foundation since they fall under a marginalised section of our society and they remind Ghanaians of the suffering of neglected segments of the society such as families of victims of disasters.

In previous years, the PWDs joined street walks on their wheel chairs through the principal streets of Kumasi with May 9 remembrance organizers to remind Ghanaians of the gory sports incident of 20 years ago.

However, due to the Covid-19 safety protocols imposed by the government, the street walks have not been possible for last year as well as this year’s 20th anniversary activities to mark the day.

According to the organisers, the May 9, Foundation plans to launch a photo book this year to capture memories of the organisation’s charity activities over the past 20 years.

The book will be launched in both digital and hard copy forms.

To mark the 20th anniversary of the stadium disaster in 2021, there will also be a brief audience with President Akufo-Addo who has been described by Herbert Mensah, founder of the May 9, Foundation and former chairman of Kumasi Asante Kotoko, as “the only President of Ghana who understands sports”.

The meetings with President Nana Akufo-Addo will also be the first official recognition of the work of the private charity foundation for the past 20 years and encourage more to be done for marginalised and suffering people of Ghana.

The government committee set up 20 years ago to investigate the cause of the stadium disaster of May 9 2001 found no single person culpable for the disaster.

Indeed, the only persons who have paid the full price for the deaths of over 126 Ghanaian soccer fans remain the families of the victims of that regrettable day.

DISCLAIMER: The Views, Comments, Opinions, Contributions and Statements made by Readers and Contributors on this platform do not necessarily represent the views or policy of Multimedia Group Limited.
Tags:
Herbert Mensah
May 9 stadium disaster
Persons With Disabilities (PWDs)
President Nana Akufo-Addo