Mayweather to relinquish all his titles today? 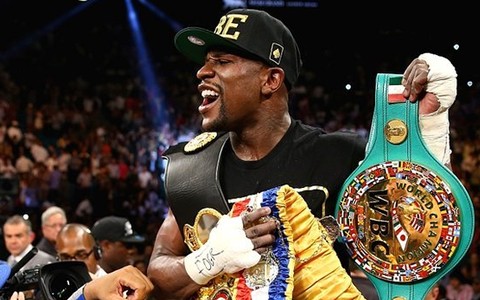 Floyd Mayweather has announced his plans to relinquish his three welterweight titles after he beat Manny Pacquiao in what was dubbed as 'the fight of the century' in Las Vegas.

Mayweather moved his unbeaten record to 48-0 as he scooped the WBO welterweight title while retaining the WBA and WBC crowns.

Having underlined his class, Mayweather indicated that he would relinquish all of his belts in order to give other boxers a chance of competing for the titles.

"I don't know if it's Monday, maybe in a couple of weeks," he said after the fight. "I'll speak to my team and see what we decide. "I'm not greedy. The other guys need a chance. It is time they fight for the belts.

"It is about giving the younger guys an opportunity."

Leonard Ellerbe, CEO of Mayweather productions, added: "Floyd has been in the sport 20 years and has accomplished everything in the sport. "What else can he accomplish? There are younger guys up and coming and they'll get an opportunity."

Pacquiao took issue with Mayweather's defensive style, saying: "He didn’t do nothing, he was always running … I got him many times with solid punches … I can handle his power."

Unfortunately for Pacquiao, the judges did not see anything wrong with Mayweather's style, or the manner of his victory.