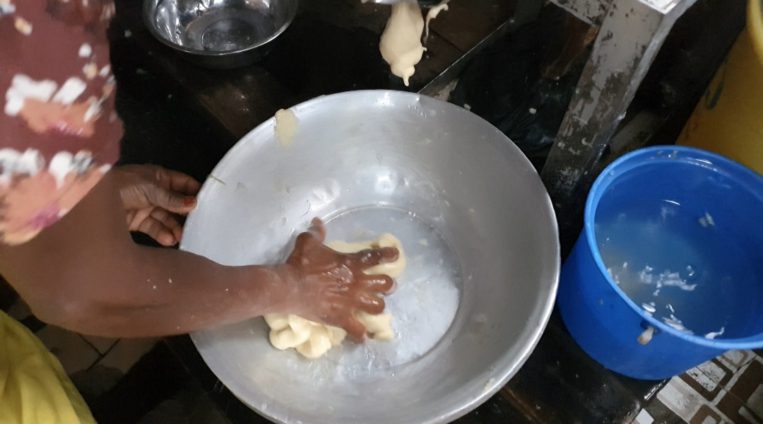 A study carried out by the Department of Chemistry, Kwame Nkrumah University of Science and Technology has revealed as high as 50% increase in the concentration of metals such as Zinc and Iron in some mechanically milled fufu samples.

Though from the research, the Estimated Daily Intake of Metals such as Zinc and Iron was lower than the International Food Standards’, they warn over indulgence in fufu may result in accumulation of these metals in the body, which though are essential, may result in unwanted effects with prolonged exposure.

Fufu is a popular traditional delicacy for most Ghanaians, especially among the Ashantis.

It is prepared from the combination of boiled cassava alone, or in combination with plantain or cocoyam through pounding in a mortar with a pestle.

The process of making fufu can be laborious, hence in the spirit of technological evolution, some commercial fufu joints have opted for a faster and easier method, namely, mechanically milled fufu.

The research published in the International Journal of Food Contamination explored the concentrations of heavy metals in mechanically milled fufu and its potential health risk to consumers.

A heavy metal is any metallic chemical that is usually toxic or poisonous at low concentrations. They can inherently be either toxic or essential.  Examples include Iron, Zinc, mercury, arsenic, chromium, and lead.

Bioaccumulation of these metals in food may be associated with an increased risk of brain, kidney and heart diseases, among others.

“Due to lifestyle changes, the pounding of fufu has been commercialized and mechanized. Generally these machines are made from steel, and due to the possibility of the components of steel leaching into the food and the ability of these metals to store in our organs and cause several problems, we decided to conduct this research,” one of the researchers Ms. Patrica-Ivy Agorsor, a Graduate Student in the Department stated the reason for the research.

A total of 30 milled fufu and un-milled fufu ingredients were sampled from five communities around KNUST campus in the Ashanti Region.

The results after laboratory analyses showed that chromium, Nickel and Manganese, were below the detection limit.

However, there was about 50% and 58% increase in Iron and Zinc concentrations respectively, after milling.

This indicates that the fufu pounding mill added some metal concentrations due to friction, wearing and tearing of the grinding plate as the food samples come in contact.

Thankfully, these levels were below the Food and Agriculture Organization (FAO) or world health organisation (WHO) allowable limit except for an isolated case of high Zinc concentration.

This is an indication that it is generally safe for consumers in the study area to patronize mechanically milled fufu.

“When it comes to food safety, I urge regular monitoring by authorities,” she recommended.