Media giving too much exposure to fraudulent people - Kufuor on murder of 10-year-old by teenagers - MyJoyOnline.com 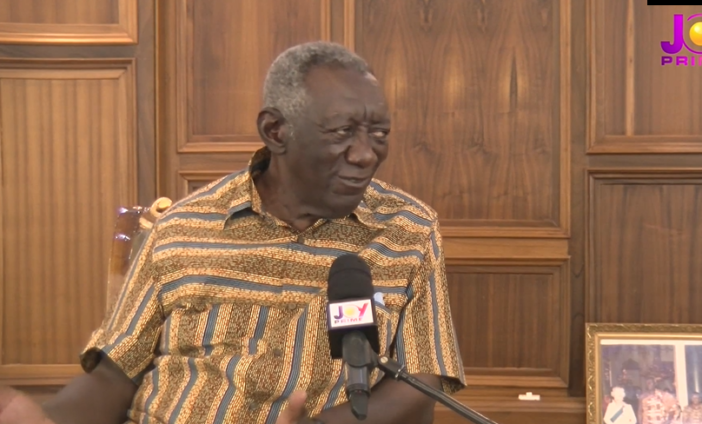 Former President John Agyekum Kufuor has attributed the murder of a 10-year-old boy by two teenagers to the increase in attention given to “fraudulent” individuals on various television stations.

Speaking to JoyPrime’s KMJ he said that some media houses have been giving their platforms to ingenuine people and trickers who make vain promises while the nation watches on.

“How could young people do this? What do they know? Unfortunately, you media people are giving so much exposure to tricksters and fraudulent people, promising everything. When you look at them you should know that these are people who are themselves just bad and ignorant. That is not the way for our society to go.”

The Former President said that it is important some of these people are not given the platforms to perpetuate their lies because of the impact they could have on society.

His comment comes after the 16 and 18 year old suspects confessed to taking their young neighbor’s life for rituals.

According to the Police, one of the suspects confessed that a spiritualist, whom they had discovered on national television agreed to help them become instant billionaires if they will provide a human being and a sum of ¢5,000.

The two, per the police charge sheet, admitted that they killed the 10-year-old Ishmael by hitting his neck with a club.

This was after luring him into an uncompleted building under the guise of selling him a video game at Lamptey, a suburb of Kasoa in the Central Region.

This development has triggered anger among a cross-section of Ghanaians over the seeming increase in spiritualists and Mallams on television promising unreasonable get-rich-quick avenues for the unsuspecting youth.

Former President Kufuor urged media houses and their editors to cut out contents and people that could “defraud the society.”

He added that leaders in the communities, security services and the media should also work together to check some of these persons. This, he added, will ensure these fraudulent persons do not take advantage of people.

“We need to do that, media and of course the authorities too should come up and tackle all these people who are now virtually hijacking the airwaves with vain promises and trickery. They should be eradicated than even some of the diseases we are talking about.”

Meanwhile, Chairman of the National Media Commission (NMC) has downplayed speculations that the killing of a 10-year-old boy in Kasoa was influenced by the proliferation of spiritualists on national television.

Yaw Boadu-Ayeboafo sees the linkage as a lazy way to approach the investigations into the murder which saw two teenagers, Felix Nyarko and Nicholas Kiki gruesomely murder their friend, Ishmael Mensah with the intention of using his body parts for rituals.

“To put it on a charge sheet that this is the reason why they did that, I think that this is a very lazy investigation,” he said on Newsnight.