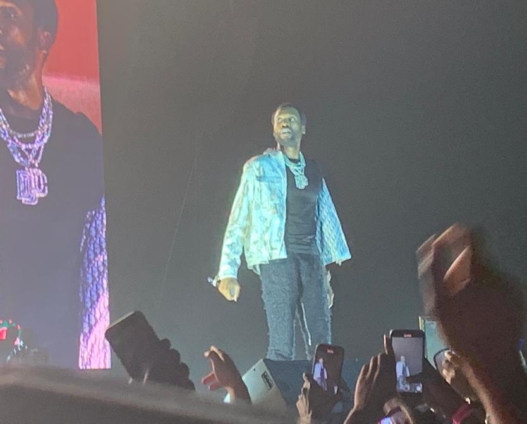 Meek Mill’s dreams came true, but with an accompanying nightmare. The King of Philly had earlier communicated his passion to visit Africa, and Afro Nation was a good chance to make that happen.

On Thursday night, the American rapper did his final set at the festival which happened at the Marine Drive, Black Star Square.

But his commute to the premises ahead of his performance was a turbulent one. He was mobbed by fans excited to see their superstar.

Amateur footage showed Meek climbing over the gate into the arena, as he struggled to ditch the zealous group.

This affected the scheduled time for his performance.

Midway through his act, the 35-year-old revealed that he had been “pickpocketed while battling for my life trying to enter the venue.”

He, however, pushed through the rest of the show without fail.

Meek Mill dropped back-to-back hits from his catalogue and fans could not hold back their excitement.

He later took to his Instagram to share his brief nightmare pleading for the return of his phone, although his long-time dream of visiting the motherland had become a reality.

DISCLAIMER: The Views, Comments, Opinions, Contributions and Statements made by Readers and Contributors on this platform do not necessarily represent the views or policy of Multimedia Group Limited.
Tags:
Afro Nation
Meek Mill