Meet Ethiopian engineering graduate who cleans shoes for a living

Chekole Menberu, now 27, had high hopes when he graduated with a degree in chemical engineering two years ago in Ethiopia.

It was a moment to savour, considering the years of toil and the difficulties he had gone through to reach this moment.

For years, he had cleaned shoes on the streets in order to pay for his upkeep.

From an early age, Mr Chekole had to look for work on the streets.

His father died when he was still young, and he had moved in with his grandparents in Fogera in the Amhara region. His mother remarried.

'I kept nagging to go to school'

He really wanted to go to school but his grandparents could not afford the fees and other expenses.

So he headed to his uncle's home and began working as a shepherd. But he still continued to hope that his grandparents would help him out.

"I kept nagging my grandparents to send me to school," he told the BBC.

Eventually, his grandfather agreed to his request and got him registered at an elementary school in a town called Woreta.

But his grandfather's help was cut short when he was in the school's second grade.

"I had to move out and find a way to help myself," he says.

With help from a friend who was a shoe-shiner, he started cleaning shoes.

From third grade until the time he enrolled in university, he supported himself using the money he earned while cleaning shoes after school.

"I thought cleaning shoes was a job that would help me. I would spend half a day working, and the other half studying," he says.

"Life was hard. But I was encouraged by stories of people who thought like me, and became doctors and engineers." 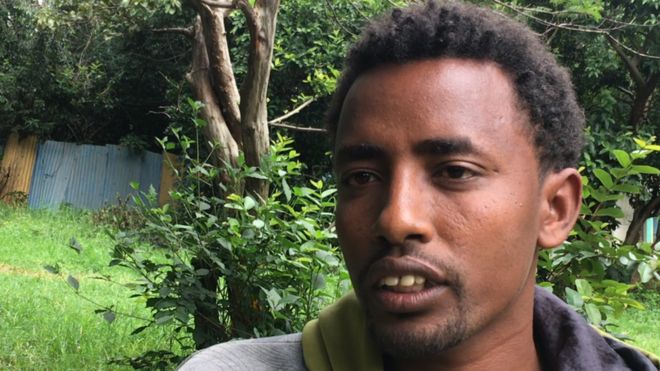 'I was very desperate'

Every academic year brought stress for him because he had to buy school uniform, which he could barely afford.

"Education cost me a lot," he says.

"I had many difficult times, but I will never forget how desperate I was the years I moved to grades eight and 10 and the year I joined university."

Despite all the difficulties he faced, in 2013 he managed to join the University of Bahir Dar, in the Amhara state capital, where he studied chemical engineering.

"There was a rumour that the country needs many engineers in industries, and that is why I decided to study engineering. I hoped to get hired as soon as I graduated," he says.

His five-year stay at university was not as difficult as before. With a letter from his home town stating that he had no-one to support him, the university was now paying him 200 birr (about $10; £8) a month.

"I also used to get help from my friends and dorm-mates in campus. [But] as the day of my graduation approached, my anxiety increased, thinking of what I was going to do after graduation.

"I was worried I would be unemployed," he says.

In 2017, Mr Chekole graduated with a BSc in Chemical Engineering, and his immediate task was to find a job.

But he has not yet been successful.

"I spent three months looking for a job in [the Ethiopian capital] Addis Ababa. I walked from one industrial park to another in the city looking for jobs, but wasn't lucky."

He travelled to different towns, even as far as Woldia, about 520km north of Addis Ababa, in search of employment.

"I even applied for jobs requiring no degrees. But my application has repeatedly been rejected by employers who think I might demand promotion."

He started working at a factory for 29 birr ($1) per day, but soon left because that was not enough to survive.

He is far from alone.

Despite Ethiopia's recent economic progress, about a quarter of young people (aged 15-29) in urban areas were unemployed in 2018, up from 22% in 2016, according to the country's Central Statistical Agency.

So Mr Chekole joined other unemployed graduates to seek help from the state. But the government said there were no funds for chemical engineering graduates.

After months of searching and with nothing to show for his education, he returned to Bahir Dar – to the job he never thought he would go back to.

"When I had no option left, I decided to go back to clean shoes."

On whether he regrets going to school, he says he would not be this angry if he had not been educated.

"This education cost me a lot, and I didn't get a reward from it," he says. "I wouldn't have sacrificed that much for it." 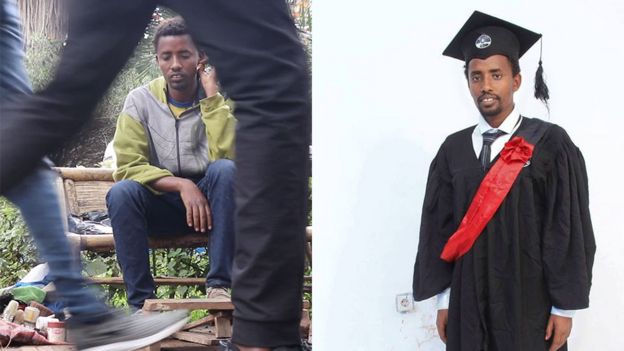 Mr Chekole complains that Ethiopia's government focuses a lot on politics and security issues, rather than creating jobs for the unemployed.

"My teachers who know me from university get shocked and turn away. But some of them encourage me and give me some money."

"My campus friends often come and get their shoes cleaned even when they're clean, just to give me some money."

He is hopeful, despite everything, that he will find a fitting job. "I still go to noticeboards where jobs are often advertised," he says.