Message from the Morning Man: My One Story 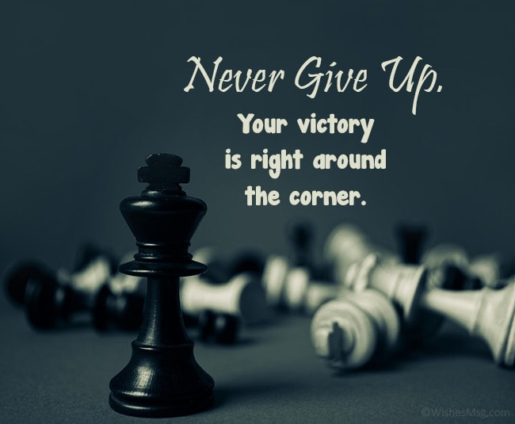 On the rare occasions that I get to hang out with my friends, we often spend time debating all kinds of existential questions.

One of our favourite questions that keep coming up is this one: Can anyone at all be successful, or are successful people born that way?

Clearly, we haven’t settled the matter definitively, which is why it keeps coming up, but one thing is clear: successful people have certain things in common.

Now, after years of reading about, and meeting successful people, I think I’ve figured out the single thing that they all have in common:

They never give up.

Never give up – probably the biggest cliché in the world, but also the only guaranteed way of avoiding failure that I can think of.

There are so many stories and testimonies that illustrate the fact that perseverance results in success, and whether you were born with the genetic traits of success, or you’re just working hard to make it in life, sometimes, you just need to hear that ‘one story’ which resonates sufficiently with you to flip that switch in your mind and decide once and for all, to never give up in your pursuit of success.

Today, I’m going to tell you my One Story.

Stephen was ten years old when he started writing. Unlike most young, gifted writers, Stevie – as his mother called him – knew immediately that he wanted to make a career out of it, so he started to send his work to publishers.

This was around 1957. As you can imagine, publishers didn’t have much time or attention for the handwritten manuscripts of a ten year-old author, and so Stevie got a great number of rejection letters.

Now, I don’t know how old you are, but I’m sure you hate rejection. I know I do. The realisation that you – or your work – are not good enough for someone can be the most heart-breaking and demoralising feeling ever.

If that’s how you feel at your age, imagine how it felt to a ten year-old.

There was a nail sticking out of his bedroom wall, and the first time a publisher sent him a rejection letter, Stevie impaled it on that nail. As the rejections kept coming, he kept impaling each new one on the nail, on top of the old one. This went on for years.

In the year 2000, Stevie wrote about those years of rejection. He recalled, “By the time I was 14…the nail in my wall would no longer support the weight of the rejection slips impaled upon it. I replaced the nail with a spike and kept on writing.”

Today, that determined, persistent young author, “Stevie” is known to you and I as Stephen King – author of 54 novels and over 200 short stories. Today, in spite of all those early rejections, Stephen King is the world’s most successful horror writer of all time. Just because he flipped a switch in his mind and decided that no matter how many times he was rejected, he would Never Give Up.

My friends, I remember how I felt when I read Stephen King’s words, “I replaced the nail with a spike and kept on writing.” As a 14 year-old, he realised what most adults still don’t get: that you need to go through a lot of no’s before someone says yes to you, but the reason why most of us fail is because we let each rejection get to us. We translate rejection to mean we’re not good enough and never will be.

But successful people have a different attitude towards rejection. They get excited every time they’re rejected, because they know that with every “no”, they are one step closer to a “yes”.

Now, I don’t know whether Stephen King was born with this attitude or not, but I do know that it worked for him – 350 million copies of his books sold worldwide, with so many of his works adapted into multi-million dollar earning blockbuster movies is sufficient proof that perseverance pays. So I decided to have the same attitude. I flipped a switch in my mind and decided to Never Give Up.

My name is Kojo Yankson, and I’ll never hear a “yes” if I don’t learn how to take the “nos”.