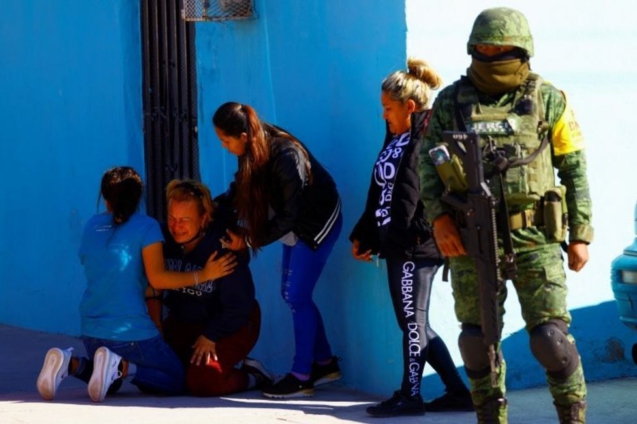 A total of nine people were killed, three at the wake, and six more at the funeral service

Gunmen in Mexico have killed nine people mourning the death of a man who died in jail last week, officials say.

The nine were killed in two attacks in the northern city of Ciudad Juárez.

Assailants first burst into a private home where friends and family had gathered for the wake of the inmate and shot dead two women and a man.

Hours later, the premises where the funeral service for the same man was being held, were targeted by attackers who killed six more people.

Witnesses said the gunmen stormed into the home, which doubles up as an evangelical church, as a pastor was holding the funeral service. They described scenes of panic as the gunmen opened fire.

Among those killed were a 12-year-old boy and his father.

Investigators told local media there were strong indications that the same criminal group was behind both attacks.

Officials have not released the name of the inmate whose funeral was attacked – but the prosecutor’s office said he had been killed on Wednesday while imprisoned in a jail in the city of Chihuahua.

His body had been returned for burial to Ciudad Juárez.

Ciudad Juárez, on Mexico’s border with the US, is one of the Mexican cities with the highest murder rate nationwide.

In 2021, an average of four people was murdered every day in the city, according to data from the regional prosecutor’s office.

Most of the murders are linked to rivalries between local drugs gangs, the region’s attorney general says.