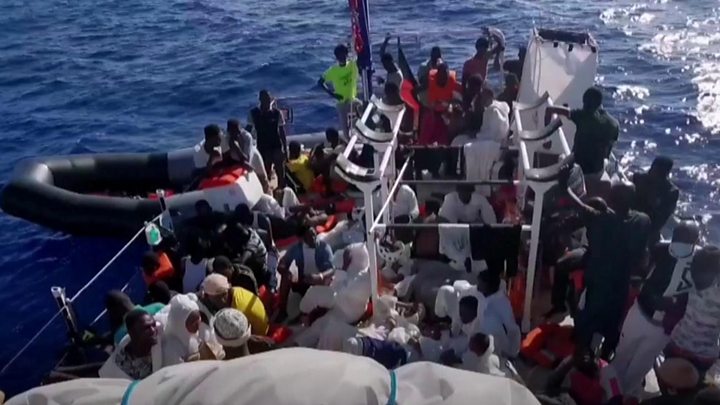 The UN Refugee Agency says almost 400 refugees and migrants rescued by three ships in the Mediterranean must be allowed to disembark safely.

A joint statement issued with the International Organization for Migration said it was a “humanitarian imperative to save lives”.

Another rescue boat SeaWatch 4 later took the remaining 150 on board.

The crew of Louise Michel had earlier tweeted a call for immediate assistance.

European authorities had not responded adequately, they said. Sea Watch 4 said late on Saturday it was now carrying 350 people who needed to disembark as soon as possible.

A third boat also needs assistance. A group of 27 migrants and refugees, including a pregnant woman and children from Libya, have been aboard the Maersk Etienne since their rescue on 5 August.

The UNHCR and the IOM said the lack of a deal on a regional landing system could not be an excuse to deny vulnerable people safe harbour.

More than 400 refugees and migrants on #MVLouiseMichel #SeaWatch4 and #MaerskEtienne must be allowed to disembark.

A mechanism based on cooperation between states would avoid these situations always and unnecessarily becoming human and political crises. https://t.co/DrCoqpTKDR

“It is essential that other EU member states provide more support to countries at the forefront of welcoming those arriving by sea in the Mediterranean,” the joint statement said.

The Louise Michel, a 31m boat which is funded by Banksy, has already carried out a number of rescue missions.

Its crew tweeted that they had managed to keep the vessel stable and had a dead body of a would-be migrant in its only life raft.

The crew managed to keep #LouiseMichel stable for almost 12h now. Our new friends told us they lost 3 friends on their journey already. Including the dead body in our one life raft, that makes 4 lives vanished because of Fortress Europe… And we are still waiting. pic.twitter.com/Te2PKCv2Gn

The UNHCR then appealed for the urgent transfer of all those on board warning that “any delays could jeopardise the safety of people on board, including the crew.”

On Saturday, the Louise Michel confirmed via Twitter that the Italian coastguard had taken 49 of the most vulnerable survivors but this left “the majority still waiting”.

Migrants in the Mediterranean

The SeaWatch4 later tweeted it had taken the remainder of the Louise Michel’s migrants on board.

The Maersk Etienne said it had been asked by the Maltese authorities to rescue the 27 people on board in early August but had not been allowed to bring them ashore. The Maltese government says the migrants were rescued outside Maltese waters and the tanker had never been asked to sail to Malta.

“A commercial tanker cannot be considered a suitable place to hold people in need of humanitarian assistance or who may be in need of international protection,” the UNHCR and IOM said.

According to UN data, 443 people have died or have gone missing trying to cross the Mediterranean from north Africa so far in 2020.

Just over 40,000 have arrived in Europe by sea during the same period.