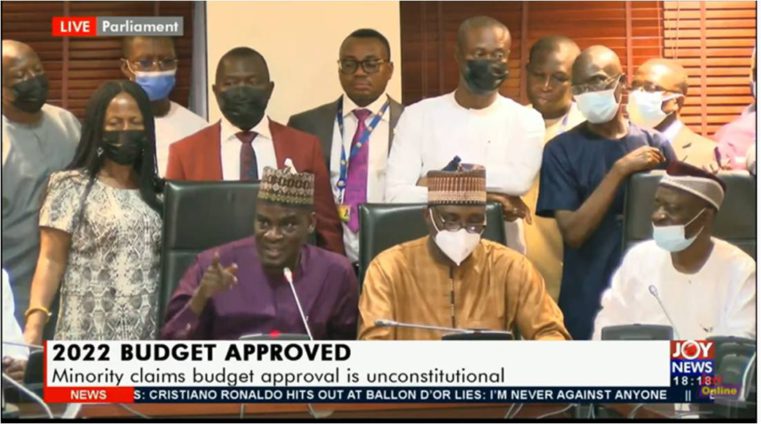 The first betrayal, Martin Amidu revealed, was when the Minority caucus and the leadership of the National Democratic Congress, against the wishes of the party supporters and a section of the public, approved the nomination of some Ministers, including Finance Minister, Ken Ofori-Atta.

According to him, had it not been for their approval, Ken Ofori-Atta would not have had the opportunity to impose ‘draconian’ taxes on the Ghanaian populace, particularly the E-Levy.

He said the second betrayal of the Ghanaian people by the Minority was in their absence from the chamber during the rescission and subsequent approval of the 2022 budget statement, which they (Minority Caucus)rejected on Friday.

He stated that had the Minority been in Parliament as was expected of them, the motion to approve the Budget would have been lost.

“If all the 137 members on the Minority side attended the parliamentary sitting and voted against the decision to rescind the rejection of the 2022 Budget, there would have been a tie in the vote for rescinding the rejection of the 2022 Budget even if the independent member voted with the Majority and the motion for a recession would have been lost by the Majority of 137 members minus the Speaker who could not have voted or be counted as voting.

“Without the approval of the motion for the vote of rescission, the Majority caucus could not have further gone ahead to purport to approve the 2022 Budget at the Parliamentary sitting on November 30 30, 2022,” he explained.

He accused the Minority of resorting to political opportunism when they realised the Majority had outsmarted them by calling a press conference to disassociate itself from the rescission and approval of the 2022 budget.

“Ironically, at the same press conference, the Minority shamelessly and in an Orwellian Big Brother doublespeak fashion accepted to work with what the Minority termed the unconstitutional rescission of the 2022 Budget rejection decision of November 26, 2021…” he added.

Martin Amidu says the Minority has voluntarily offered itself for recruitment as supporting members of the ensemble of Akufo-Addo’s Kabuki dance of democratic-autocratic governance.

“Like the last sentence in George Orwell’s Animal Farm, the distinction between the Majority and the Minority has become so blurred that when one looks from the Majority to the Minority, one is unable to distinguish one from the other.”

Meanwhile, he says the failure of the Minority to resist the Akufo-Addo led administration’s Kabuki dance has initiated a one-party system where Ghana is not the priority.

“The one-party state prohibited by the spirit of Article 3 of the 1992 Constitution has slowly and imperceptibly crept into the governance style of our democratic-autocratic President through his recruitment skills of the Minority. As a result, Ghana is being put Last instead of First under the new compromises between the Majority and the Minority,” he said.

“Let every patriotic Ghanaian of whatever political persuasion speak up and defend Article 3 of the 1992 Constitution and the other rights enjoined thereunder for prior stakeholder consultation in an accountable and transparent governance system for Ghana,” he concluded.

DISCLAIMER: The Views, Comments, Opinions, Contributions and Statements made by Readers and Contributors on this platform do not necessarily represent the views or policy of Multimedia Group Limited.
Tags:
Akufo-Addo
Martin Amidu
Minority