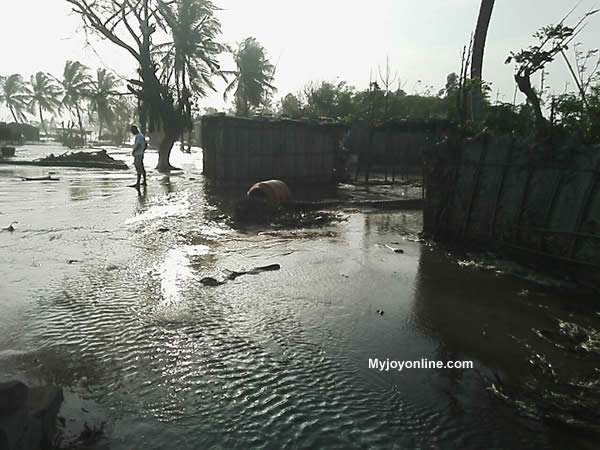 Contractors working on 10 sea defence sites dotted across the coastal areas of the country have packed out of site over non-payment for work done, the Minority has claimed.

The Minority in Parliament is demanding government intervention for the contractors to return to the sites to protect lives and property.

The ranking member of the Works and Housing Committee of Parliament, Samson Ahi, who led his side to visit the selected areas wants governments’ immediate intervention.

“By 2020 tidal waves is going to create havoc for people who live along the coastal areas of the country.

“When we were in office we created several sea defence projects and I thought it was going to continue from where we left off,” he said.

In June this year, high tides caused flooding in the Ketu-South District of the Volta Region.

This caused schools to remain closed as the classrooms served as makeshift homes for displaced residents.

This was one of the many that hit many communities along Ghana’s coasts, destroying homes and displacing hundreds. Over 242 houses were submerged and properties destroyed there.

Apart from their submerged residences, their livelihoods were also affected with over ten boats and nets completely destroyed.

The situation was not any different in the Cape Coast in the Central Region, where a fisherman lost his life in the wave of destruction.

At least three fishing communities were hit by the disaster as fishermen in Cape Coast, Ankaful and Saltpond had their livelihoods completely destroyed.

The former National Democratic Congress (NDC) government awarded the contract to provide sea defence to protect life and property for some selected communities, in the Greater Accra, Western, Central and Volta regions.

However, government’s failure to make payments for certificates presented by the contractors has forced them to abandon work.

Mr Ahi says the Akufo-Addo government must act quickly to get the contractors back to work because “we cannot wait until we are hit by another disaster before we move to do something about it.”

He debunked claims that although the past government earmarked the projects, the funds were not made available.

“For government, it is not like the money is put down, you work, provide the certificate and you get paid and continue, that is how it works for the contractors,” he said.