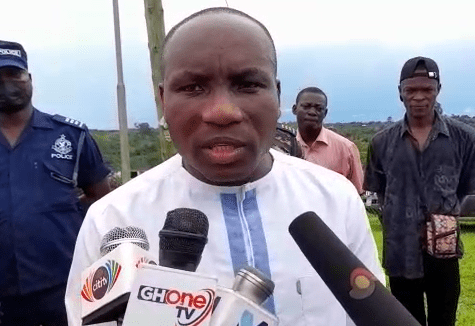 The District Chief Executive (DCE) of Ellembelle, Kwasi Bonzo, has been granted a police enquiry bail following his arrest on Wednesday, September 7.

The Police said this in a press statement issued on Thursday, September 8.

Mr. Bonzo has been charged with five counts according to his lawyer, Salome Erica Abakah.

She said the charges he will face include assault, conspiracy to commit assault and resisting arrest.

The Police added that all persons involved in the case will be pursued.

“As the investigation continues, we would like to assure the public that all other accomplices, both Ghanaians, and foreigners, will be arrested and brought to face justice,” the statement added.

The DCE was detained with four others by the Western Regional Police Command for allegedly attacking the police and obstructing an operation to retrieve a missing excavator several kilometres into a forest within the Ellembelle District.

Sources say the DCE has been granted bail after being detained for over 12 hours whiles his four accomplices remain in police custody.

In a related development, the Police has arrested five Chinese nationals over the missing excavators.

“The Police have arrested five Chinese suspects in a special police operation conducted between the night of 7th September till the dawn of 8th September 2022,” the statement said.

Their arrest follows the retrieval of one of the excavators.

DISCLAIMER: The Views, Comments, Opinions, Contributions and Statements made by Readers and Contributors on this platform do not necessarily represent the views or policy of Multimedia Group Limited.
Tags:
court
Ellembelle DCE
Galamsey Fight
Police