MMDCEs and MPs must collaborate to stimulate development – Kwadaso MP 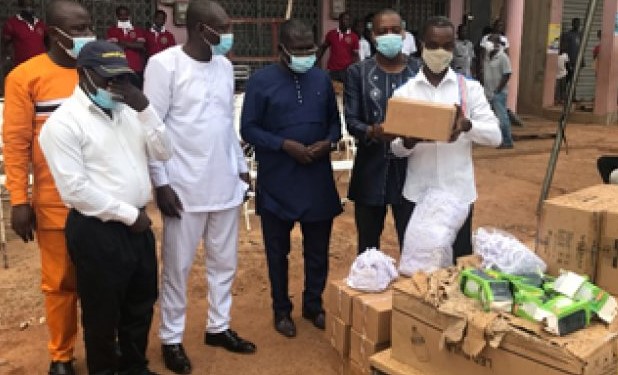 Member of Parliament (MP) for Kwadaso, Dr Kingsley Nyarko has called for effective collaboration between Metropolitan, Municipal, and District Chief Executives (MMDCEs) and their Members of Parliament (MPs) to stimulate development in their various constituencies.

According to him, closer working relations between the two parties would not only help to bring the needed development but also peace and harmony in the constituencies.

Speaking at a town hall meeting organised at Tanoso, Dr Nyarko said unity among key stakeholders and leadership from the various interest groups, was key to community building and development.

The meeting, the eighth in the series, was to afford the MP and the Municipal Chief Executive (MCE), Mr Richmond Agyenim Boateng, the opportunity to learn at first hand the challenges facing the residents and how best they could work together to resolve them.

Dr Nyarko said the town hall meeting was to provide the residents the platform to discuss the development of their communities and suggest means of resolving them.

He took the opportunity to thank the people for voting for the NPP and him to represent them in parliament and appealed to the people to unite and support him and the MCE to bring the needed development to the area.

He presented quantities of nose masks, hand sanitizers, and LED bulbs to the Assembly Member for distribution to the people in the area.

Dr Nyarko also donated four motorbikes to some Police stations to help fight against crime in the constituency.

The MP said it was important for the community members to decide the projects, which were of priority to them, for consideration and implementation and pledged to work closely with the MCE to beef up security in the area.

On his part, Mr Richmond Agyenim Boateng appealed to the people to rally behind the Assembly to help bring the needed development in the area.

He said the government was committed in completing the Tanoso-Abuakwa road and asked them to be patient as the government continued to work on the ongoing project.

The Abuakwa District Police Commander who received the motorbikes, expressed gratitude to the MP for supporting the Police to fight against crime.

He appealed to the people to involve themselves and establish community watchdogs to support the police to fight against crime.

The Assembly Member of the area, Mr Richard Kofi Karikari praised the MP for engaging residents to know the challenges facing them and finding the best ways that could be used to resolve them.

DISCLAIMER: The Views, Comments, Opinions, Contributions and Statements made by Readers and Contributors on this platform do not necessarily represent the views or policy of Multimedia Group Limited.
Tags:
Development
Dr Kingsley Nyarko
MMDCEs
MPs