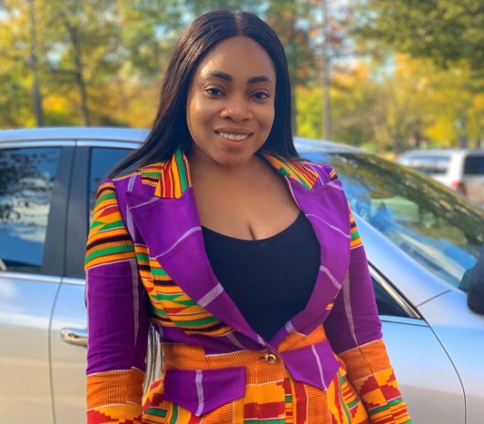 Moesha Buduong has returned to acting following months of absence from the film industry.

The actress is featured in a yet to be released TV series from the camp of writer and producer, Kofi Asamoah.

In a snippet shared online, Moesha Buduong is seen having a conversation with colleague actor Big Akwes.

She wore a sleeveless body con dress with an animal imprint and a headscarf.

This comes after Moesha Buduong took a break after she made some startling revelations about the life she lived over the years.

In a viral video sighted by Myjoyonline.com, the actress said she attempted suicide but was stopped by some people.

She later announced her repentance in a video in which she shared her testimony.

Months after, she is back on social media.

In a video posted to Snapchat, she dismissed claims that she is suffering from severe mental illness.

According to her, she is just a new person and believes everyone will like the person she is now, compared to her previous self.

Announcing her return to social media, Moesha said, “so guys, I am going to be saying a lot lately because so many people are calling my family and everyone thinks I am crazy. I am not crazy. I am just a new person and you guys are going to love the new me”.

DISCLAIMER: The Views, Comments, Opinions, Contributions and Statements made by Readers and Contributors on this platform do not necessarily represent the views or policy of Multimedia Group Limited.
Tags:
Acting
Moesha Buduong