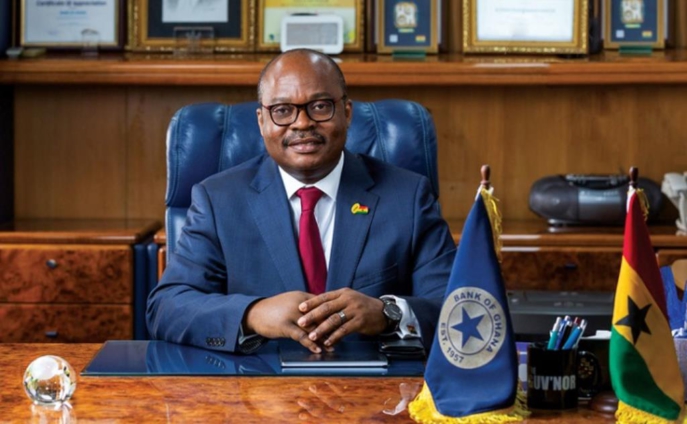 Governor of the Bank of Ghana, Dr Ernest Addison.

The Monetary Policy Committee (MPC) of the Bank of Ghana (BoG) has started meeting to review developments in the economy and set a new policy rate-the rate at which the Bank of Ghana lends to commercial banks.

The meeting which began on Tuesday is expected to end on Friday, September 25.

It is expected to announce the outcome of the meeting in terms of the “new” policy rate and how other sectors of the economy have performed on Monday, September 28.

The two Deputy Governors, Head of Monetary Policy Analysis, Head of Banking Operations and two external members appointed by the finance minister are members of the Committee.

It meets bi-monthly over a three-day period to assess current economic conditions and the inflation outlook.

After deliberations, the monetary policy rate decision is finalized by a vote of the Committee on a one-person-one-vote basis, with each member stating clearly and with reasons the choice of a preferred decision.

In instances where a decision of the Committee is not clear, the final decision is by consensus.

To provide certainty to the markets, the MPC meeting dates are published on the Bank’s website at the start of each year.

Focus of the Monetary Policy Committee of the Bank of Ghana?

The Monetary Policy Committee was established by Bank of Ghana Act 2020 with the main responsibility of what economists will call price stability and support the general economic policy of government and promote economic growth as well as proposals for the formulation of monetary policies for the BoG.

The Committee also provides statistical data and advice for the necessary in the formulation of monetary policies.

The policy rate currently stands at 145.5 percent after it was kept unchanged at its last meeting earlier this year.

The last time that the rate was reviewed was in March when it was reduced from 16 per cent to 14.5 per cent.

Some of the issues that are expected to dominate discussions include; sustaining the Ghana cedi’s stability and whether some policy measures should be introduced to help sustain it.

The local currency has witnessed some marginal stability over the past five months.

This can be attributed to some policy measures by the BoG and the current challenges facing the dollar on the international market.

However, the concern that should some additional measures be introduced to sustain the cedi’s “good run”.

Another concern that is expected to be on the table for the Committee would be how to stimulate growth during this “COVID-19 times” and whether some targeted credit can be extended to some sectors of the economy that has been hit badly the coronavirus.

The Bank of Ghana recently rolled its COVID-19 respond measures to help stabilize the banking sector and support businesses in the country. This meeting will then offer them an opportunity to review some of these measures.

There are projections according to some analysts engaged by Joy Business that, the Monetary Policy Committee is likely to keep rate unchanged at 14.5 percent.

This is based on some uncertainties ahead and threats to economic growth outlook based on the COVID-19.