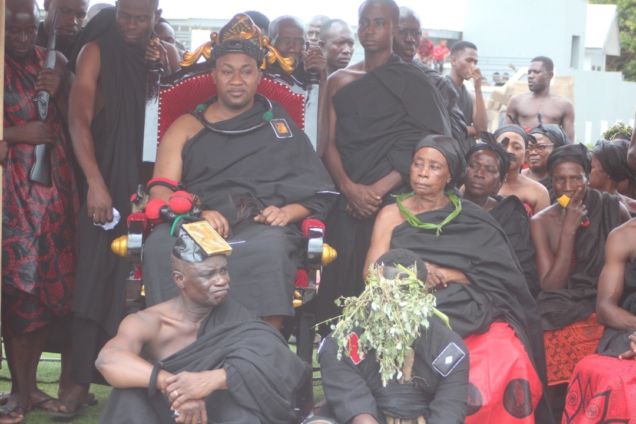 The pre-burial ceremony and funeral of the late Nana Owusu Akyeaw Brempong are currently ongoing peacefully with the beautiful culture and traditions, at Atebubu in the Atebubu-Amantin municipality of the Bono East region.

The Paramount Chief of Techiman, Oseadeyor Akumfi Ameyaw IV, joined Nananom of the Atebubu Traditional council to give the late paramount chief a befitting farewell at the Atebubu royal’s funeral grounds.

Other mourners included traditional priests, residents, politicians, former ministers, MMDCEs the clergy, and other chiefs and queens from all walks of life.

The late Nana Owusu Akyeaw who ascended the Atebubu kingship stool from 1973 – 2020 occupied the stool for 47 years.

Prior to his burial on Tuesday, the Chief was laid in state publicly at the Atebubu Palace from Friday for the hundreds of mourners to pay their last respect.

As traditions demand, the late chief will be buried on Tuesday, August 30, 2022 at the Atebubu Royal Mausoleum to join his ancestors.

He was a preserver of our tradition and culture and must ensure that he gets a befitting traditional burial and interment as he joins his ancestors.

Nana Owusu Gyimah, Ankobeahene of the Atebubu Traditional Council and the Chairman of the Funerals Committee said the Dorteyie of the late paramount chief has created unity among Nananom and if maintained it can bring development to the area.

He noted that due to the unity among the chiefs they have been able to enstooled a new Atebubu paramount chief Nana Ohempong Yeboah Asiamah to continued to rule the people of Atebubu and bring development to the area.

Meanwhile, the Dwantoahene of the Atebubu traditional council, Nana Akwasi Ampong advised the youth of the town to throw their support behind the new chief for the development of the area.

DISCLAIMER: The Views, Comments, Opinions, Contributions and Statements made by Readers and Contributors on this platform do not necessarily represent the views or policy of Multimedia Group Limited.
Tags:
Bono Region
Burial of Paramount chief