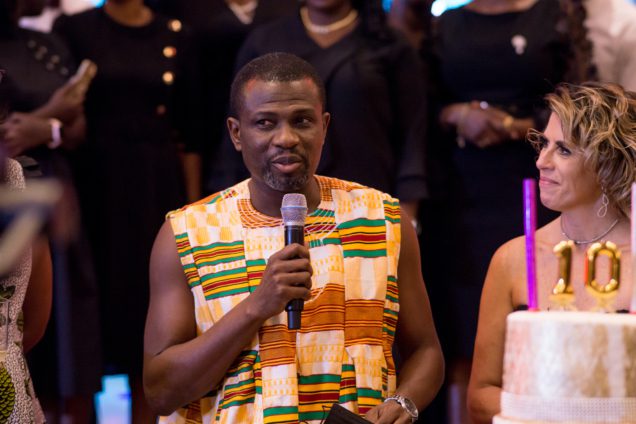 Mövenpick Ambassador Hotel has held its 10th Anniversary Corporate Soirée with a glowing tribute to all hardworking and dedicated team members as well as stakeholders and partners that have made its 10-year journey a success.

The 5-star hotel brought together top dignitaries including members of the diplomatic community, team members, partners and several government delegations, as well as the hospitality industry players.

The 10th Anniversary celebrations, which began some months ago, was on the theme “Doing the ordinary in extraordinary ways – 10 years and beyond”.

The celebrations have seen a lot of activities undertaken, including blood donations in conjunction with the Accra Technical University, charity donations at the Shelter for Abused Children under the Kilo of Kindness Campaign, amongst others.

She further acknowledged the immense support and contributions of the corporate organisations, stakeholders and her team’s passion for making real memories.

“Mövenpick Ambassador Hotel Accra strives to demonstrate quality, reliability and care and has achieved many successes since joining Ghana’s hospitality industry. For the greatest part of last year, we were deprived of sharing these commitments with you but we are grateful for this opportunity to reaffirm our beliefs that welcoming, safeguarding and taking care of guests is at the very heart of what we do and who we are,” she said.

On her part, Mawuena Trebah, the Board Chair of Mövenpick Ambassador Hotel Accra expressed her delight about the collaboration between government and the regulators for all the success achieved within the 10 years of operation.

The Deputy Minister of Tourism, Arts and Culture, Mark Okraku Mantey, led the proposal of toast and the cutting ceremony of the Mövenpick at 10 Anniversary cake.