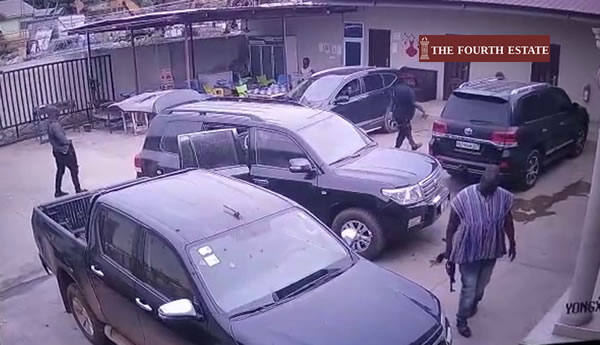 Photo: CCTV footage secured by The Fourth Estate captured the operatives, armed, some of them in mufti

The Member of Parliament for Amenfi West, Eric Afful, has accused National Security operatives of illegally confiscating more than GH¢3 million and unknown quantities of gold from his constituents in an operation last month.

According to him, the operatives led by DSP Azugu attacked and seized money not only from a casino they had gone to carry out their operations but also other businesses nearby.

Speaking to JoyNews’ Joseph Opoku Gakpo, he said that “they attacked the residents within the community and attacked shops. Information reaching me is that even a filling station over there was also attacked.”

“Per the information, I have gathered, they took away about GH¢3 million from the entire operation they did with an amount of gold I cannot quantify now. So it is not only the casino, it is about the casino and its environments.”

He indicated that he had filed a petition with the IGP and although he has not yet been officially informed, he was reliably informed that the police had gone to the premises to investigate the matter.

This comes after the Inspector-General of Police, Mr. James Oppong-Boanuh, commenced investigations into allegations of assault and theft by National Security operatives during a raid on two Chinese-owned Casinos in Asankragua in the Amenfi West constituency.

According to sources, on May 7, a team of plainclothed National Security operatives led by DSP Azugu arrived in a Toyota V8 Land Cruiser wielding AK-47 rifles dressed.

The raid was purportedly part of efforts to clamp down on illegal mining and mineral trading activities in the community.

Upon arrival, it is reported that the task force assaulted staff of the Casinos and seized their phones, refusing to return them even after the raid.

The Amenfi West MP indicated that he will call for a Parliamentary inquiry into the issue and also call the operatives into Parliament to answer questions regarding the operation.