MTTD confiscates 60 motorbikes during an operation at Madina 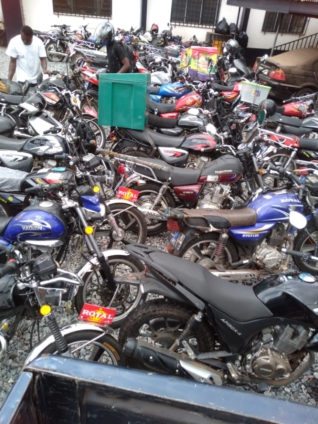 The Motor Transport and Traffic Directorate (MTTD) has confiscated motorbikes of recalcitrant riders at Madina in the Greater Accra Region.

Led by Divisional Commander in charge of the MTTD, the team clamped down on reckless motorcyclist who rode with total disregard for other road users.

A total of 60 motorbikes were impounded at the Divisional headquarters.

Riders were arrested for various offences including riding without a licence, uninsured motor bikes, and many other offences.

The MTTD is, however, screening the defaulters for further punitive actions to be meted out.

This comes in the midst of severe debate about the operation of motorbikes in the country.

While one faction is of the view that the commercial operation of bikes must stay illegal because it poses high death risks to users.

The other side maintains it should be legalised as it is a source of employment for the riders.

One of the major campaign promises of the National Democratic Congress (NDC) is to reverse the ban on the popular ‘Okada’ business. The ban was passed when the party was in office.

However, the Transport Minister, Kwasi Ofori Asiamah, revealed that the government has begun stakeholder consultations to decide on whether to review the law banning the commercial use of motorcycles or implement it.

Over the years, Okada riders have stormed parliament to appeal for legal recognition.

DISCLAIMER: The Views, Comments, Opinions, Contributions and Statements made by Readers and Contributors on this platform do not necessarily represent the views or policy of Multimedia Group Limited.
Tags:
Motorbikes
MTTD
Okada legalisation