Muntari is a tremendous signing for Hearts - John Paintsil - MyJoyOnline.com

Muntari is a tremendous signing for Hearts – John Paintsil 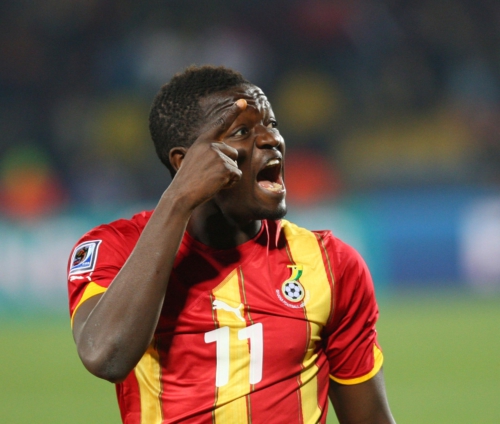 Hearts of Oak confirmed the capture of the 37-year-old via the club’s official twitter account, on a one-year deal.

The arrival of the former Liberty Professionals player is expected to boost the Phobians efforts in a title defense which has not gone exactly to plan and Paintsil, who currently has a coaching role at the John Paintsil Academy believes the midfielder can come up clutch for Hearts.

“After 20 years Muntari returns to Ghana Premier League, it’s amazing. I’m very, very happy that Muntari is joining Hearts because he still has more in his locker. He has energy to give back to Ghanaians. He’s not playing for Hearts of Oak alone, playing for Hearts of Oak is playing for all Ghanaians because he is a national asset and every Ghanaian loves to see him playing, so him coming back to the Premiership is a very good thing so well done to Sulley.

“He hasn’t featured for two years but whether two or four, if you see Muntari now you’ll be amazed. We train every Saturday night, we play two hours nonstop and he’s able to play all those hours and he’s doing well, running up and down and shooting as usual. He’s a hitter, he hits from 40-yards and is still scoring goals. So I don’t think him being without a club for two years will affect him playing for Hearts. It will never play any impact on him, I know he’s fit.” Paintsil said to JoySports.

Hearts have been hit with what can be described as personnel issues in midfield with stalwart, Salifu Ibrahim temporarily sidelined by injury and Emmanuel Nettey jetting off to Iraq to join Duhok SC.

However Paintsil believes Muntari who racked up 84 appearances for the Black Stars, will do more than enough to fill the void in Hearts’ team.

“I have confidence in Muntari coming in to play for Hearts. It’s amazing I wish him all the best and I can’t wait to see him on the field. All the Hearts of Oak players will look up to him and they’ll be expecting his leadership quality that will help them and of course he is going to be at his teammates. Muntari is a leader and he is someone who doesn’t like defeat and the Hearts players have to understand that sometimes when they see him shouting and pushing them, they shouldn’t take it to heart.

“Players might feel intimidated that ‘he’s Muntari’ so they cannot tell him when there’s a mistake but Muntari is a professional player and understands everybody. People who don’t know him think he’s someway but when you’re close to him you’ll see the kind of great person he is. Aside being a good footballer, he’s also a great human being.”

Hearts are currently sitting fifth in the Ghana Premier League, 10 points off leaders and rivals, Kotoko and the signing of Muntari comes at a time where the Super Clash is scheduled to kick-off in just over a fortnight.