Museveni: Bobi Wine is an enemy of Uganda - MyJoyOnline.com

Museveni: Bobi Wine is an enemy of Uganda 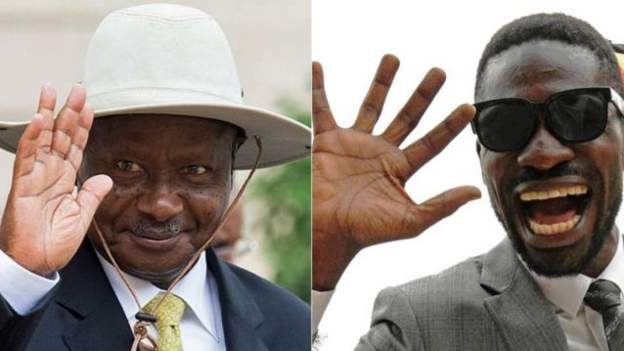 Uganda’s President Yoweri Museveni has called his leading critic, musician-turned-politician, Bobi Wine, an “enemy of the country’s prosperity”, in an interview with the BBC.

The 36-year-old, affectionately known as the “ghetto president” has been a thorn in the side of Mr Museveni since his election as MP in 2017.

Bobi Wine, whose real name is Robert Kyagulani, recently declared that he would challenge Mr Museveni, 75, for the presidency in the 2021 election.

He is the leader of The People Power movement which accuses the president of overseeing a system of oppression during his 33 years in power.

Mr Museveni rejected the accusation telling the BBC’s Alan Kasujja that his government is not repressive, but was dealing with Bobi Wine as an enemy:

“That may be one of the reasons [for the cancellation of Bobi Wine’s concerts] I suspect, I have not talked to the police in detail.”

President Museveni said he still has unfinished business in Uganda as president and will only leave if asked to do so by his National Resistance Movement (NRM) party.

“My home is waiting for me, but we have issues as Uganda to deal with. It is those issues that make us do what we decide to do politically along with our colleagues. If the fraternity of NRM thinks that they no longer require the contribution of the elders then we will happily go and do other things.”

We are not here for a show, we are not theatre-goers, we are people who are here to deal with very big issues of Uganda and Africa.”